Empire of the Moon - Έκλειψις 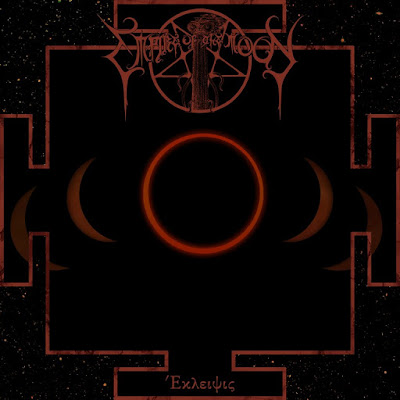 This band's first demo was released in 1997 and contained two purely pagan folk tracks, as it was uncommon but not completely unheard of from Greek black metal bands at the time. No one heard about Empire of the Moon since then, and even though its members are involved in the country's underground (for example, with Chaosbaphomet or Wampyrinacht), this project stayed in the shadows. The comeback happened unexpectedly with a debut full length in 2014 named Πανσέληνος (the Greek word for fullmoon), a rather solid album as a whole.

A very familiar musical pattern is actively followed on Έκλειψις (=eclipse), which nails the fixation of the group with the moon and exercises the ways of old school Greek black metal as much as possible. The tracks are epic with slight heavy metal hints, there are frequent keyboard background layers and shrieked vocals, as well as some clean voice chants here and there. It's hard to stress on something that makes Empire of the Moon unique, but I think fans who frantically listen to this type of black metal will enjoy it.

Some of the record's aspects could use some more expertise, like the sub-optimal drumming or the guitar work, which has its ups and downs throughout the listen. Parts of some songs contain the needed intensity, yet often Έκλειψις gets too repetitive for its own good and also doesn't hit as hard as one would expect, as Empire of the Moon may be aiming for a more dark and epic atmosphere than something intense. While they succeed to an extent, the often bland compositions betray them and do not really give the band an identity, especially in a sound so specific as Greek black metal.

The production also plays its role, giving a feeling that the tracks were given a far from pointy mixing but instead were made warmer than their own good. Empire of the Moon try to strike some punches at times within the record, like in parts of the closing "Per Aspera Ad Lunae – IV. Son of Fire" or "Per Aspera Ad Lunae – I. The Resonance Within", but neither the sound nor the repetitiveness lets them get the message across. I was never a big fan of this kind of ritualistic clean vocal narration either, even when legit bands like Acherontas do it I just skip.

"Per Aspera Ad Lunae – II. Two Queens Appear" is one of the fine moments for 'Εκλειψις, as it is a bit more lively, has a couple of good musical ideas, the synths are combined nicely with the guitars and the structure and length well thought. One level above everything else in the album is also the sixth track "Devi Maha Devi", which features much more entertaining guitars and keeps its tempo, so these two pieces would be what I would suggest as a listen to someone getting into it now.

Apart from that, my issues with the soft sound and uninspiring tracks, which are hard for someone to figure out what band it is within Greek black metal, place Έκλειψις in an unfortunate position of being a substandard album. The recent year, new bands have brought the scene to the rise (Synteleia, or Funeral Storm, or many more) with solid offerings and notable music, should ring a bell to Empire of the Moon, who I really hope will find the drive they had in their previous album. It's a pity for such a nice looking logo to be on a simplistic cover art like this one too, just the cherry on top of mediocrity.

Email ThisBlogThis!Share to TwitterShare to FacebookShare to Pinterest
Labels Black Metal, Empire of the Moon, Greece