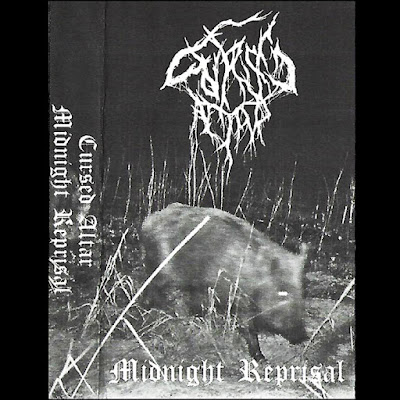 Extinctionist Records is a small underground label featuring a handful of raw black metal bands in the whereabouts of the US and Canada, as well as the unknown Swedish act Abzyrglak, that I know because I happened to listen to their promising 2019 demo, A Graveyard for Humanity..., last year and enjoyed myself. Looking into Cursed Altar's one and only member, Extinctionist, it seems like many of his personal projects are in his label too, which makes him rather busy and also responsible for a small corner in the underground scene with several solid mini-releases.

Having released two demos prior to that, he moved fast into the debut full length album, titled Midnight Reprisal, which clocks at almost half an hour and is only released in tape format (at least for now), a typical and well embraced tactic in the more obscure areas of black metal. I hadn't heard any of Cursed Altar's previous material, or almost any of Extinctionist's other projects, so Midnight Reprisal was basically the introduction to this person musical mindset and after listening to it for several times, the one name glowing all over my face is this: Ildjarn.

Despite the record's relatively short length (even though I was always fond of thirty minute albums), it features twelve tracks, which should make you think that most of them do not last very long, and that's the truth. There's several 1-2 minute tracks in Midnight Reprisal, while the longest are up to around 3, something that the aforementioned apparently big influence to this project, has also done in the past. From some track titles, Cursed Altar also hold an anti-human thematic concept, even though I found the boar in the artwork and some similar references in the album, very appealing for such a raw black metal release.

If you have ever listened to the black metal side of Ildjarn, you will immediately recognize the patterns in Midnight Reprisal too. Monotonous, scourging guitar riffs, in a simplistic and straightforward manner, based on only a couple of different ideas per song, which justifies their length as well as paves a very edgy road during the listen. Most of them are mostly middle paced, and the production is indeed fairly noisy, but not the extent the Norwegian mastermind used to record in the 90's.

The opening track "Ancient Cruelty" is one of the highlight moments for its interchange between the torturing guitar playing, and a few other that I liked more are "Lone Boar", "As the Final Breaths" and "Bewildered In Midnight Blackness". Midnight Reprisal is empowered a lot by its raspy, scourging vocals, a powerful tool painfully used in all of the tracks of the album. Assuming that his voice didn't have this power, the album would probably be unlistenable for me. At a couple of moments, Cursed Altar throw some extra elements in the songs, like the snail paced ending of "Last Night of Human" even though this doesn't really change the fact that this is very close to Ildjarn's music.

For its kind, Midnight Reprisal is a special record that needs an aware listener before being discarded as repetitive and dull. The musical ideas of Cursed Altar in this release do not make it unique but hold some personality and I was hooked to the album more than several, well-produced and recently released records. Raw black metal made hateful and aggressive, it doesn't rely on just a dusty production but offers minimalistic tracks, most likely inspired by an artistic outsider in the scene, without being a copycat of it (thumbs down Ødelegger). Extinctionist's other bands might not be like this but one day I should check some more.