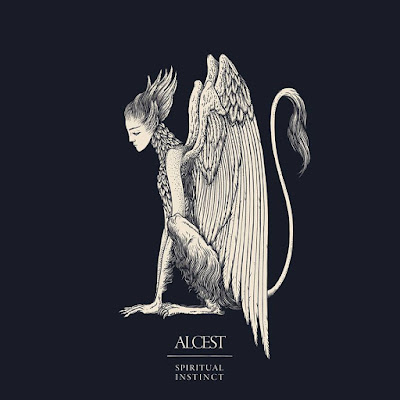 This is the situation of a band I have been following for more than ten years, which I first listened in 2007 with their debut full length, at a time when I wasn't aware of the existence of post-black metal or post-rock in general. Going back to their catalog, Alcest's first demo is the closest to black metal there is, but 2005's EP Le Secret clearly showed the direction the band would follow for the years to come. When Écailles de lune was released in 2010, I fell in love with it and still it is one of my favorite records of the decade.

Since then, I have kind of lost Alcest with their series of albums in the period of 2012 - 2016, which were legit but none of them completely thrilled me at any point. By considering Shelter the weakest point of the project, it was intuitively innocent to consider that they were taking a stance away from their harsher self and sticking more to their ethereal, post-rock sound. Kodama was good, and now the new age of the band puts them under the aegis of Nuclear Blast, maybe the biggest metal label in the world.

For these reasons, I entered Spiritual Instinct with ambiguity. There is not a big change I will hate an Alcest album, but falling into the pool of boredom in this kind of music is a daring challenge. The band's wondrous, delicate style is overwhelming, and the compositions have picked up a kind of intensity that I hadn't heard from them for many years now. Its flooding atmosphere is wonderful, emphasizing the strongest point of Alcest and their signal sound is rendered just amazing.

While one would never characterize their material as dark, Spiritual Instinct definitely explores a gloomier side of the band but in a very discrete way. The shrieks are back, and how brilliant they are, adding a load of power to the otherwise top-notch clean vocals of Neige. The tracks themselves are vigorous, even containing some more vivid guitar lines I wouldn't think of hearing from Alcest. Heck, the album's first two tunes, "Les jardins de minuit" and "Protection", contain melodies of the best quality this band has offered for some time now.

As a band with a very personal sound, there is no point in comparing it with other post-black / blackgaze bands, but instead only with themselves. I believe they are now at a very good point musically, with Spiritual Instinct climbing high to a place among the best they have ever released. It has the lovable aesthetics, the compelling musicianship, as well as the memorable tunes. The use of vocals is excellent, the guitar work equally beautiful and brings elements of Alcest's vision together in total harmony.

I can't choose one of the first three tracks on the album as my favorite from Spiritual Instinct, yet the second half of the record will stay in the loop as well for this year. The longest song "L'île des morts" reaches nine minutes in length and is quite powerful, while relatively simpler tracks like "Sapphire" or "Le miroir" give out a soothing feeling that makes you sit even more comfortably and listen to the record. The last moments of the self-titled track end the listen leaving an itch to the brain as if there's more to come, having the listener craving for some more music. Everything is so perfectly placed.

There has been a couple of years now that I had skipped Alcest from my listening sessions, but now they are back, barged into my playlist and staying there. It's nice for a band to achieve this, and bring an urge in you to pick them up again right where you left them. Spiritual Instinct is a definite success and could be right behind Écailles de lune for me, for its flawless flow and merit can't go unnoticed. It's the embodiment of what I admire in this specific band. Congratulations.