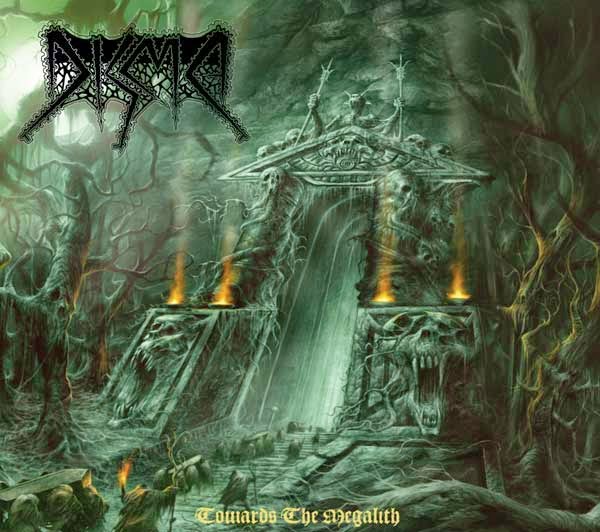 I always think death metal should be a merciless, soul crushing experience. Traditional death metal bands are brutal, but not always do they achieve something further than shreddy riffs and guttural growls, which always sounds good anyway. That explains why I loved Incantation from the first listen, as well as the bands that follow the same path with them these years, like Disma. This is the first and only full length by the band so far and it definitely was one of the best albums of the year 2011, since it has thrilling compositions and a "dismal" atmosphere that few bands have today. It was also an awaited listen, since the band's first demo in 2009 and the small taste of an EP in 2011.

There are eight tracks that collect up to fourty six minutes of music in Towards the Megalith. Most of the tracks have been used in previous releases but there are also a few new compositions, which is really a pleasure, since I was eager to listen to their early stuff with the sound they deserve. The production of the record is finally more than worthy of listening, thick and powerful, as the tracks themselves. The guitars and the drums build the first layer of the sound, where the inhuman growls come and go above, creating a deathlike aura from start to finish. The excellent cover artwork visually describes the music too, as a road towards a big gate into the underworld, along with death wizards and necromancers and around a sickly-green main colour.

Disma's style has a lot of doom / death metal elements, as they often slow things down and keep simple riffs, rhythmic drum beats and even slower vocals in various parts of their songs. It feels great when such parts come in, since they are well made and give even more strength to the faster parts (i.e. the transition from the end of "Chasm of Oceanus" to the intro of "Spectral Domination" is like being hit in the face by a sledgehammer) and emphasizing the solid structure the album has. Many would think of Autopsy during the gloomier moments, but still Autopsy are more traditional American death and don't step towards a darker sound like Disma. In Towards the Megalith, the drums sound organic and not squashed out of existence like in most records of the 21st century, which is very cool to listen to. The bass has a dose of distortion in it (check the track "Vault of Membros", which is also masterpiece).

All in all, I took exactly what I expected from the debut of Disma, which is something relentless and gloriously heavy. The band gave all they had to offer in here and no listener is safe when listening to it, being a flawless effort in it's entirety. The band's style is certain but not repetitive, and all the melodies are down-tuned and straightforward, giving a pummeling vibe as  background where all hell breaks loose with each track. I definitely recommend Towards the Megalith to ANY fan of underground death metal, any person who aches for some actual brutality when the genre it taken too far melodically, lyrically and in terms of modernity today, so that more people fit in and like it. Towards the Megalith is strict and and dangerous, if found in the wrong hands.