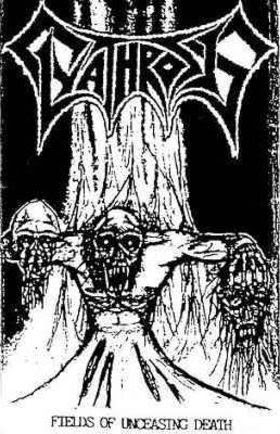 Only three demos were released by this Dutch band, back in the early nineties. Fields of Unceasing Death is the second release which was of course independent, containing five compositions and a total of twenty three minutes of direct, tape worshipping death metal.

Among the countless worthless demos of that era, Pyathrosis managed to release an actual gem that worths discovering and preserving as one fine example of the energetic underground. The production is noisy enough but let's the sound of the instruments to make do, making the guitars, the vocals and the drums audible and enjoyable. It's sound does not differ from the recordings of that time, if not slightly deeper, and covers a collection of nice compositions and ideas as a whole.

Fields Of Unceasing Death never stepped into the spotlight but it could be a collector's item, as it's not just something rare, it actually has some quality music to be listened. The vocalist Wiebe van der Veen offers painful growls and stays focused to the traditional way of singing and his talent is a highlight of the whole demo, as it was exactly what I wanted to hear over the fuzzy instrumentation.

Moments of groove are not missing from the demo either, especially in the introduction tracks. Yet, the band does not stray from pure death metal and it reminded me of Bolt Thrower or early Unleashed at some points, if comparisons are necessary. The work on the drums is satisfying while the guitar lines present catchy and poweful riffs, making the listener want to come back to the record after it finishes.

To sum up, I think Pyathrosis nailed it with this demo and I'll look into their other two ones as well, to see if they are as good as this. They have a steady sound and good tracks, a fine and efficient length and a cool, simplistic appoach to the genre. The hounds of early demo metal should already be on the job.