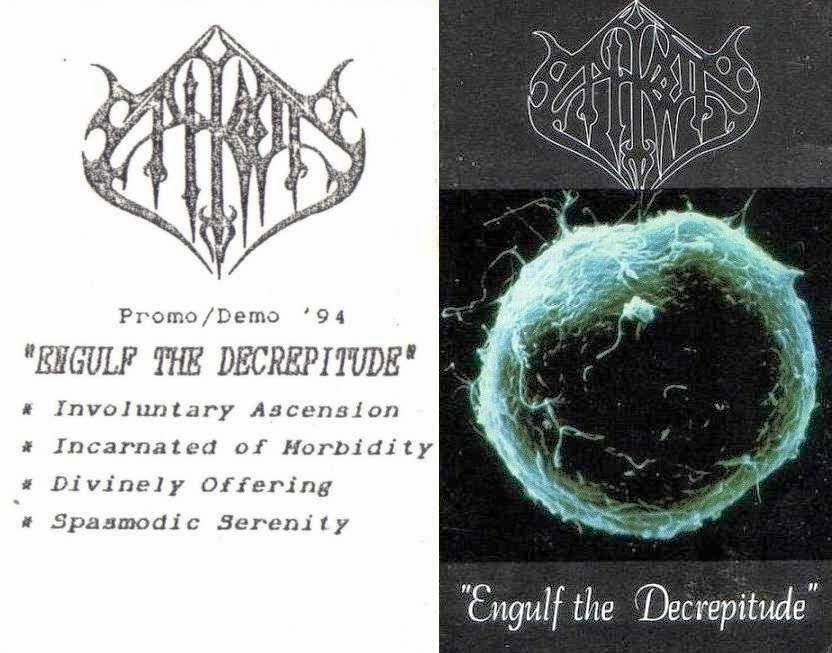 The very first release by the death metal / grindcore band Epitome came out in 1994 with a title of Engulf the Decrepitude, and it's the only one that doesn't emphasize the word "rot", as one might quickly notice looking at their discography. These guys have been active since the beginning of the nineties and there is a new album coming out this year, meaning that they have been around for a long time.

For a first demo, this one has a rather below average production, without being completely bad. The songs display a standard and somehow simplistic form of death metal, based on a couple of riffs and repetitive fast drums. It's not anything overwhelming and it doesn't achieve much as a whole, even though under the perfect circumstances, it would be considered as solid. Epitome don't overcome the basic level of techicality and variety either, meaning it's just a typical demo.

Straying from the regular death metal vocals, there are a lot of grunts and guttural vocals here, as well as a couple of weird screams / yells at various points. It's the one thing that makes it a little more unusual than one might guess, yet they are not always done in absolute perfection. Listening to Engulf the Decrepitude, I hear an immature band with a few musicianship problems, trying it's luck for the first time.

While the tracks are repetitive, the sixteen minutes of music that can be found here are tight as a whole. Epitome play a little imperfect and dull, showing their low playing level for a first demo. Yet, since the band has a whole discography after all these years, it's possible that they have improved and moved forward as a band. Once I listen to the rest of their stuff, I'll know.