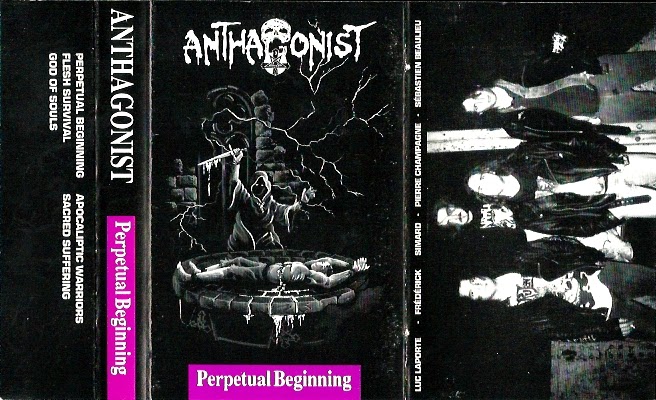 | Stretched out in their blood |

Perpetual Beginning is the second and final demo of the short-lived band Anthagonist, which formed in the late 80s in Quebec, Canada. The band played straightforward death metal with a few thrash metal elements, giving away their era and influences. It is not the crappiest demo ever and will mostly appeal to tape collectors and die hard archive fans.

The production of the demo is legit and provides an audible sound, with a fair dose of dust of course. There are not much to miss, as the guitars, drums and vocals, all reach the same volume and level. Anthagonist play a nice version of traditional death metal, as the bigger bands did back then and still do. There is solid guitar work and riff variety, as well as a couple of extra solos and melodies, as well as a very nice bass sound.

There are five songs in the demo with a total length of sixteen minutes, ideal for it's kind. I think the band would have the strength to record a great record, judging from the few interesting moments this has and it's a pity they didn't manage to do anything more as a band. Still, this release on it's own isn't much of a deal, being above average but relatively forgettable, at least now. After all these years, there is tons of death metal better than it.