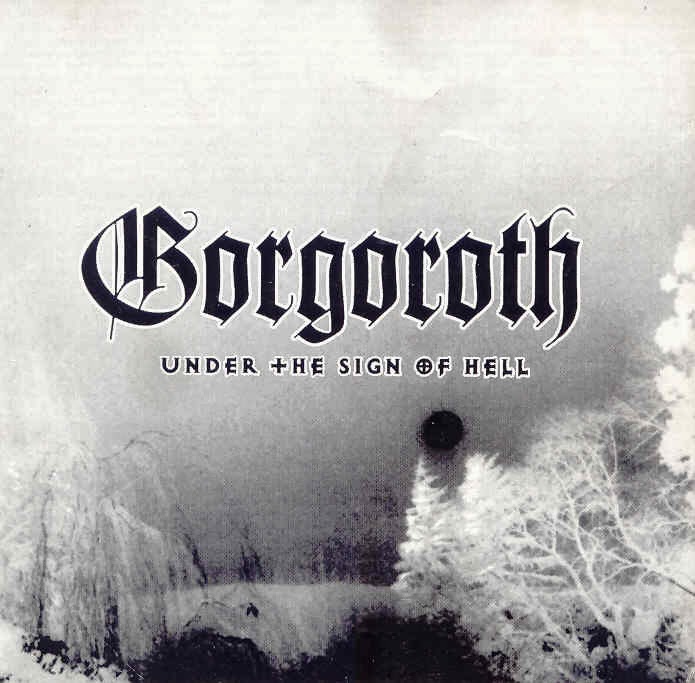 Revisiting an old album is not an easy task for black metal bands, as the fanbase is always waiting around the next corner with a mask and a pocket knife to put the artists down, for their awful betrayal. I'm certain Gorgoroth have been in the center of attention these years and many people probably hate them by now, especially regarding the poor choice they did to re-record their third full length album completely. They are the greedy rockstars who need more money, so they strive to collect any last bits of the seeds they once planted, re-releasing their records so that we, the ignorant fans, go and buy them. I'm sure it was that they were thinking, as every other mainstream band does nowadays, oh these traitors! Of course, I don't follow that logic and I'm not afraid of the boogeyman.

From what I have seen and heard, the band remade this album, mainly because nothing worked out in the original version. For sure, the randomness and the sloppiness they released in 1997 might have had more personality and that's why kvltists hold it so dearly close to their hearts, but that record had production issues that needed to be fixed. The first time I heard the album, I wasn't even sure if these were the actual recordings they did and how they let it happen, as it just sounds disgusting. It's not the dirty sound that bothers me in general, it's this particular arrangement. These drums sound like metallic kitchen pots being smashed together, while they are too high in volume, while there is a general catuous and dazzling vibe in the album that makes it annoying. Listening to the very first track "Revelation of Doom" describes perfectly the situation, that's what Infernus listened a decade later accidentally, and realized how much it sucked.

So, I believe the main reason this is out again is to fix the problems of the sound, it's not a financial plot against the followers. I understand why some people might have been stuck with the record all these years, being true and faithful to it and getting the same feedback from it, since Gorgoroth were once such a band indeed. It's natural that a new, mechanized version of their favorite album will hurt their feelings, they will loathe it with their heart and blame the band for selling out. The truth is, I really couldn't care less about their pet peeves as they would not care about mine either and since I have not grown up with Under the Sign of Hell, i think the new version is improved. It's not necessarily better, but it's cleaner, and the stupid mixing that was done is no more, now it sounds like the average polished black metal album. A little spiritless, but not garbage worthy.

I'm not reffering to a musical improvement, since Gorgoroth didn't change anything compared to the first album. They didn't add new elements or change the tracks a little, this is the same, note to note and line to line album with just different sound (apart from the missing interlude). They even hired Pest back (who was the original vocalist when they first made it) to deal with the vocals and Tomas Asklund (has played in Dark Funeral and Dissection before) carried the burden of the drums for the occassion. Infernus remains the main guy behind the whole idea, as it is his music and mostly his editing in the new and the old version. Any person who listens to both versions has to admit that the new one is easier to go through as it has that basic balance. I'm feeling this album is being cursed because it was remade by guys who have apparently moved in the overground, as there weren't as many complaints when Svartsyn remade The True Legend, a better album, before and after.

Moreover, it was Mayhem who released Life Eternal EP in 2009, who had some rough mix recordings of their all time classic De Mysteriis Dom Sathanas, slightly different from the originals, a completely avoidable release if you ask me. Re-recordings are met with skepticism and distrust most of the times and it's correct, but a couple of times they work, like this one for example. The original album was harsh and bland, almost inconceivable because of it's sound, while the new one is somehow tasteless and sterile. The weak points of the actual music are more apparent in 2011, as this is not fully destructive as Gorgoroth's previous material, only in a couple of moments does one feel the energy. It's like being afraid of something before knowing it better, when you realize it might not be that dangerous after all. For many reasons, I enjoy the newer version more, for I had the chance to listen to the music without needing pain killers after it.

The intense moments of Under the Sign of Hell lie in tracks like "Blood Stains the Circle", "The Rite of Infernal Invocation", "Krig" and "Ødeleggelse og undergang". They are fast and intense, with the familiar cutting riffing of Infernus, which is again dominant. These four tracks have all you need to check from this album, exactly the half in number, because the rest are pretty much boring and distasteful. "Revelation of Doom", "Funeral Procession" and "The Devil Is Calling" are boring and incoherent tracks, but the biggest failure to me is "Profetens åpenbaring". The viking-ish / epic vocals he tried to make in a couple of parts there sound ridiculous, as the ridiculous riffs that follow behind them. So, the album is not keeping a certain quality through it's length, as there notable moments are mixed with ghastly noises. Inconsistency.

To me, it's not the decision of the band to re-record it that sucks here, it's not even the cleaning of the sound that made it harmless. In fact, I enjoyed it a lot more than the first copy. In overall, I think Under the Sign of Hell is just an average album, with some ounces of entertainment that remind of the band's glory, but nothing more. It's not a masterpiece and it's definitely not flawless, I'm glad they chose this one over the first three, as Pentagram and Antichrist both have great sound. If Under the Sign of Hell 2011 doesn't fit for a soundtrack to your Friday cave descends, stick to the original one and it's not the end of the world.