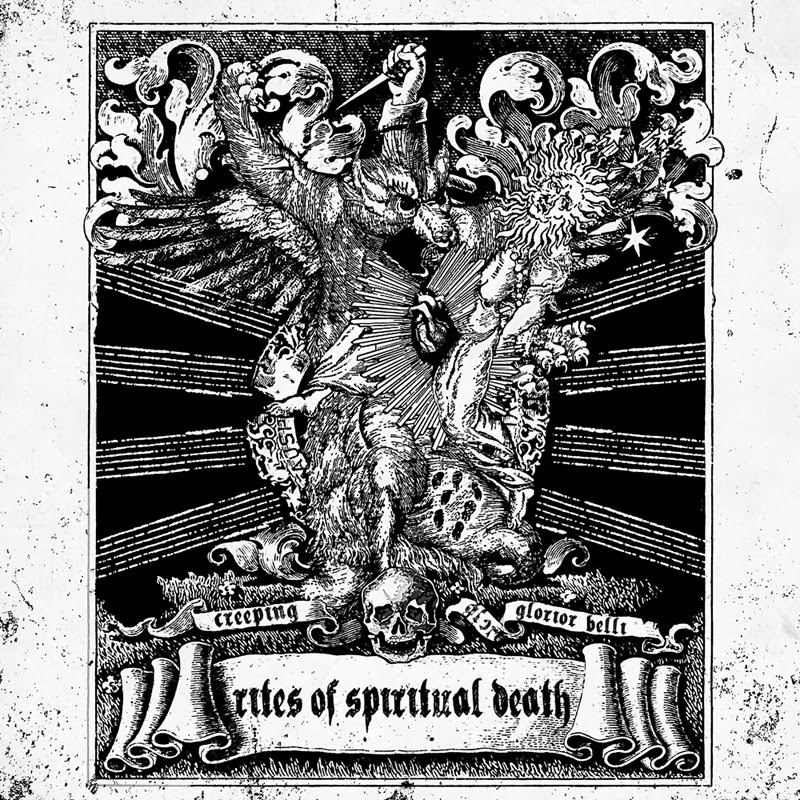 The collaboration between these two bands is they only time they have released a split record and the main reasons people would decide to check it out are the cover artwork and the name Glorior Belli, which is significantly more popular than the dudes from New Zealand named Creeping. I also got inside it for the same reason, for archival purposes, I didn't expect much and I didn't get much, despite the fact that it wasn't exactly what I thought. There are two tracks of a total twenty minutes in length in the split, quite longer than what the bands' common track lengths, but hey, the more the better right?

Opening with Glorior Belli's "Fierce Rays of Wrathful Light", a long track that comes as a surprise compared to their previous albums, as up until then they didn't really slow things down for no reason. At least when they did, they would make it more interesting, or add some kick ass blasting parts later to rebuild our trust. It turned out they like to experiment a lot and this very moment might be the starting point of their demise, but still this middle paced, doomy song has sparse moments worth listening to, even the faster parts are boring. If you are about to learn about this band, a track like this is at the level of a filler compared to their first two full length albums, so start from there.

The second track "Shrine of the Fallen Sun" is a sincere effort by Creeping to gather the broken pieces and make something nice, not really succeeding in the end. They deliver a sweet blend of doom / sludge with abysmal growing, simplistic in it's structure and very unoriginal, even though it isn't the worst track I have ever heard around that genre. I somehow enjoyed it more than the first side of the record because it's cooler and more easygoing, having a certain amount of filthiness as usual. It is also quite long and nine minutes are ideal for a down-tuned, dirty track like this. It was a motivation to listen to other material by them to have a more complete point of view.

I like the fact that the production of the record is this dirty, since it has been under little editing and stays more close to the real sound of the bands. It's fairly catuous on it's own, as in many splits like this, but still the instruments provoke an atmosphere, which is always good. However, I felt misguided listening to these two tracks, which are weak and sloppy musically. I sensed the bands didn't give their best self for this release and I know for a fact that Glorior Belli didn't, judging from some notable stuff they had written before, yet trying to find out about Creeping. Rites of Spiritual Death is a mediocre release that doesn't give the listener much to enjoy, therefore I would suggest you avoid this.