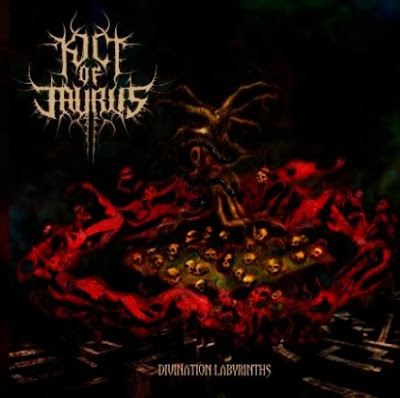 I don't remember when or how I first listened to this band, but I remember it was the Fallen EP they released in 2009 and I was intrigued by their execution style. Naturally, I completely lost track soon after until I got this album, which is also their debut full length after six years of activity, which are more than enough for a band to bond and find it's own personality. Divination Labyrinths is a solid effort that should reach the ears of as many fans of hellenic black metal as possible, as it isn't repetitive or significantly weak at any point, while not breaking through any borders either.

If you haven't noticed already, Vicotnik of Dodheimsgard has been giving the helping hand to various Greek bands (most importantly being in Naer Mataron) and he is involved here too, since the mixing and mastering of the album was done by him. Taking good care of the band's sound, it's not dusty at all, but still hostile to outsiders, while there are no glitches or annoying imbalancies among the instruments and the vocals. It is also a major improvement compared to their previous releases, which had the low-fi, one channeled black metal production plague. The album lasts a little bit over half an hour and contains eight tracks, including two instrumentals.

The musicianship of the album is relatively insightful and legit, worshiping a pure black metal philosophy that's based on satanism and occultism. Despite their semi-mythologic name (if you want to know more about Crete and the minotaur, click here) which also confused me a bit at first sight, the band does not speak that much about Ancient Greece or other pagan subjects,  keeping track of the core of the genre. I found a couple of really good guitar lines among the generally authentic work and most of the tracks have an eventful moment or two, something that I think is decisive in my final and positive view of the whole album.

A dude named Sarpedon handles the vocals in Divination Labyrinths and his effort is terrific. There is a significant level of harshness and anger in his tone, he steps correctly on the songs and has great capabilities as a whole, judging from the screams and the very few, narrating cleans he does in the album (for instance, in the track "ΠΤΩΣΗ", meaning "Fall"). The drums and the bass also have nice feelings, even though they never get the first role in the album, since the memorable elements are mostly the vocals the guitar. Musically, the album stands above average because of the beautiful and original compositions, like the tracks "Where No Moon Rises", "Hidden In All Ages" and "Channeling End".

This is by no means another regular hellenic black metal album. Apart from the main and intelligent instrumentation, discreet electronic samples have been used very beautifully. First of all, the two instrumental tracks are electronic based. The introduction contains a haunting synth with a man speaking above it, similar to horror movie introductions or serial killer crimes information. Even though it's quite clear, I don't fully get what it says, but it has been made clear by the band that it's a piece of an interview of the psychiatrist Carl Jung. "Tree of Gifts pt. 2" is the outro of the album and includes a wondrous piano line, synths, whispers and generally is much better than the simplistic intro. Anyhow, I enjoy both of them.

Apart from these, there are some weird noises during the end of the track "Channeling End", which remind of industrial black metal, or experimentations of early Norwegian black metal bands with electronics. Same unidentified but entertaining additions have been used in "The Light That Divides the Earth" and "Tree of Gifts pt. 1" (which has a fully ambient part towards the end". The result not only fits the album, but also provides a refreshing sound, fond of innovation and quality. Black metal fused with machine electronics is not a new idea in the scene and it's not completely appreciated by the die hard fans, something I don't go along with, especially when a band uses them correctly.

Divination Labyrinths is a remarkable debut by Kult of Taurus, lacking almost nothing and having a personal facete. Built on solid ideas, it has variety and efficiency in content, even if I think I would not mind if it was ten minutes longer or something. The band's hard work all these years is presented here and it might end up being one of my favorite black metal bands from Greece, if it continues like this with a second release in the next years.