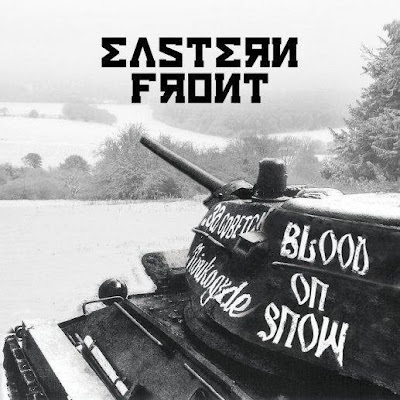 One of the many subjects bands deal with in this music is war, forwarded as history, awe or just the epitome of pain and suffering (which they are). It's one of the least tangling paths to choose and it's rather easy to acquire, given that you avoid unessecary genocide worship or racial hatred that will turn you into a moving target. Personally, I don't get why people go near extreme metal if they have not decided to come in terms with extreme ideologies and I support any band that holds tight to some beliefs, regardless of my thoughts on them. Eastern Front are a relatively new, British and warfriendly black metal band, as you can suspect from their name, and they are good storytellers as well as musicians. Their album Blood On Snow has an obvious concept around historic wars of the modern times, dealing with that in the entirety of the album, so there isn't any anti-religious / satanic/occult bubble talking here.

They have been promoting their 2008 Promo very much before releasing a new album and their efforts were awarded, as they signed to a big label like Candlelight for their debut release. Therefore, the production of the band has been positively predisposed towards a nice and clean balance, avoiding the no-fi syndrome of black metal and instead building it's own wall of disastrous noise. The instruments are audible and the sound is pleasingly polished, widowing the album as gratifying and easy to follow. I don't believe Blood On Snow sounds that bad, even though it has not escaped the vortex of modern mixing tricks and it certainly has some volume of it's own, but still I was happy listening to the various musical elements it contains and the intriguing "soundification" of it's concept. Within it's eight tracks and almost fifty minutes of length, one might as well attend a trip to cold and somber battlefields of wars.

The basic component of the album's compositional structure is definitely the variety of the guitar melodies. They aim a lot on creating epic and powerful riffs in each song so that the feeling of war is captured right away, especially in the amazing lines that have been written for the self-titled track "Blood on Snow" and "Where Warriors Once Fell". Along with the heavy, distorted guitars, lie a couple of acoustic filler parts in the songs, like in the latter of the previously mentioned or the introduction of "Motherland", also adding a lot to the atmosphere of the record. Generally, the fact that the band tries as much as they can to use their own ideas in their songs and avoid repetition and rip off techniques, is apparent and self-evident. They have a personal style in terms of structure and complexity.

I am also very fond of the distinct vocals. They are executed perfectly and in various forms, as the record contains cutting shrieks, ferocious growls and manly clean parts, the last being mostly in a narrating sense than any other. The tongue of the singer Nagant (a name also related to World War II, look it up) is delicate and forceful at the same time, varying a lot throughout the tracks and autharitarian at moments. An example is again the song "Blood On Snow" which is one of the top tracks of the record, for it's epicness, it's breathtaking main riff and the war sound samples. The use of various army, gun and battle samples used in the tracks, as well as in the wonderful instrumental "Dvenadtzat kilometrov ot Moskvy", which has synths and a piano, voice chants, a parade pace, are very accurate and give the album a whole better character.

The combination of the above characteristics is blended wonderfully here, creating a solid and very interesting album structure to listen to, as one doesn't feel as they know what's coming, a common weakness of other black metal bands. Not only that, I think it succeeds in shaping a warlike feeling, since the compositions and the melodies are not vaguely dynamic, but instead infuential and targeted to that particular direction. Blood On Snow could easily be used as a background or soundtrack to a documentary / movie / video collection (if the audience is intimate with the sound of course, hahaha). However, I was a bit balked by the distressed, simplistic lyrics, which are sadly not very effective on their own. I always expect some poetry behind the unfathomable screams, but I didn't get it here. Yet, that hardly reduced my joy listening to it.

In general, the album includes well thought ideas, presenting strong riffology and variety in it's style, while the musicianship is acute and direct. I had the chance to watch these guys live once in 2008 when they participated in a local festival around here, from what I remember they delivered really cool, despite the technical problems and the broad daylight. I'm not sure about the musical plans of the band but they are still active and I hope to see new material some time soon, as Blood On Snow grew on me and it's one of the records I come back to from time to time. If you want to take a break from purely religious themed bands and want something a little bit closer to reality, give this album a spin.