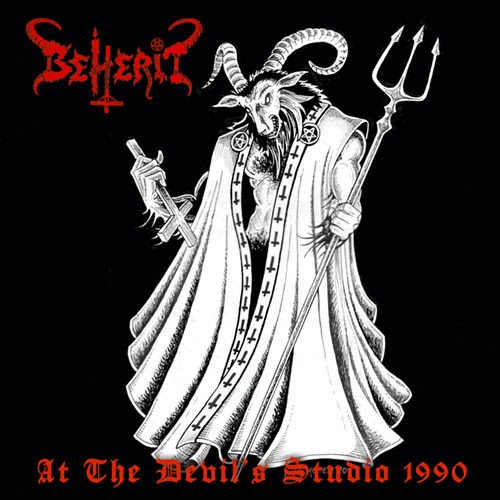 Beherit had been out of activity for almost fifteen years when they made their return with the well known, but still legit fourth full length album Engram. I tend to think of their discography as a collection that doesn't contain the two electronic efforts they released, not because I don't like them but because they have a completely different sound. If they were a side project by Holocausto (that many bands do) it might have been better. Yet, I don't have the same problem with the Burzum case so I guess it's just my personal disfunction with these guys, always forgetting the 1994-1996 work.

It seems like a main member of the band, Sodomatic Slaughter, found a tape of the mixes of what could easily be the first full length album by Beherit, before Drawing Down the Moon. For their own reasons, they weren't able to release this album so it was buried by time, only to arrive in 2010. Of course, they would cease the moment and immediately release it, fetching the fans with more, unheard material of their kvlt days, even older than their opus in 1993. In At the Devil's Studio 1990, there are two unreleased songs, as well as different versions of their old tracks, so I guess it's already easy to guess what this contains.

It's not clear to me, why they decided to release this as a full length, and not as a compilation, since it's just a collection of old tracks. In fact, it has the exact track listing structure of new, pointless compilations: demo / rehearsal versions of known tracks plus a couple of new ones. Even if it was intended to be a full length album twenty years ago, it's not how it should be released today and they could have chosen a better format. Of course it doesn't make the tinniest difference whatsoever, since the music would be the same either way, but still it bothers me, for some reason.

Maybe it's not right to judge this album, since it wasn't released as a new effort by the band but mostly for archival purposes, they know old record hunters are dying for anything that was released a bunch of years ago. I would also release a tape of my two decade old music, especially if I had built a legit name back then. Imagine being a die-hard fan of the band, I think you would have been filled with joy listening to the news on this record and you would save money for an LP as well, just for the sake of the collection. I made the mistake and listened to this as if it was a real record, and there it has nothing more than mediocre, monotonous black / death, half the size of Profanatica's dicks.

The production is quite dirty and a bit sloppy, as the volume of the guitars is higher than needed, covering the sound of the drums (I could only listen to the cymbals, unless I wanted to hurt my ears trying to find the rest of the kit) and the gargling vocals. It's sound is naturally affiliated with their demos at the time, which is understandable but still somehow unbearable, making me think that it would be so much better if they completely re-recorded it. Then, it might fit the title of a full length as well, or at least it would get a little bit closer. I don't have many comments to make on At the Devil's Studio 1990. If you are a fan, you will enjoy it. If you try to review it objectively, in the 21st century and not in 1990, you will see that it's frustrating and boring.
on January 28, 2014

Email ThisBlogThis!Share to TwitterShare to FacebookShare to Pinterest
Labels Beherit, Black Metal, Quite Bad, Table B