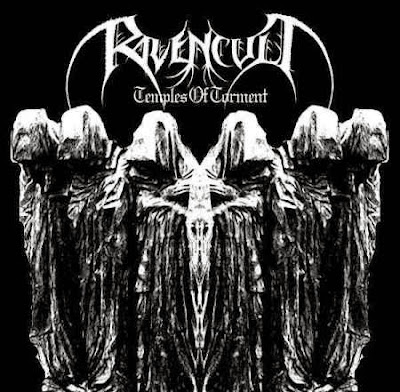 Even though the formation of this band came later than the era of the second wave, it does not differ that much from the early bands and is a high quality act in the extreme underground. Ravencult have been riveting from their first demos and EP in 2000 - 2005, a force slowly gathering strength only to unleash it in 2007 with their debut full length album Temples of Torment. The band bows to the northern legends of the genre, fueled with an old school, pure anger and resentment.

The guitar work here is very much influenced from the Norwegian scene and bands like Immortal or Enslaved, missing a bit of variety in the long run. However, there is an immense success in the collection of riffs that makes the album quite amazing, while the sound is edgy, agressive and forthright, crushing the distorted melodies into your head. From that angle, the album is a non stop bombardment of the time honored cacophony that we all love. Each track has memorable moments and the overall vibe represents what the music is all about perfectly, from the aesthetic to the lyrics and the compositions themselves. It might not be the most original album you have ever heard, but it is produced in a way that the similar points can easily be ignored, providing a highly enjoyable outcome.

While the band has studied well the ideas of the Nordics, something that can be recognized from their immidiate, cold riffs, personal nuances are not amiss. The album contains fast paced tracks as well as slower, agonizing moments and there is a slight punk influence in "Onlsaught Command", mainly because of the speed and the drum pattern. Moreover, tracks like "In Times of Demise", "The Nightsky Codex", "Utter Cold Void" (which reminds a bit of the introduction of Gorgoroth's self-titled track on the guitar) are painfully stagnant, while "The Sigil Of Baphomet", "Blessed In Heresy" and "The Needles of Truth" are swift and cadaverous. The last track, which is "The Needles of Truth", is 31 minutes long in most versions of the CD, but it's mostly silence and contains a hidden track somewhere at minute 23 with a cover of Bathory's "Sacrifice". The main song also has one of the most incisive and powerful riffs in the whole album.

I personally like all the tracks of the album except "Blessed In Heresy", which is a bit fuzzy and unplanned, maybe meant to be used as a filler track only. It still has some kick ass lines and apart from that, the remaining seven tracks are exactly any blackster's cup of tea. It starts and ends with church chants, alluding a connection with the orthodox black metal scene, where bands often use such samples for the appropriate atmosphere. Played by exquisite musicianship and accurate song writing, Ravencult is all you loved of the original Scandinavian scene with some extra, sprinkled throughout the whole record. The band was not eager to re-record tracks from their demos (which are full of amazing tunes) to fill up their debut, instead they built one from scratch and did a fine job with it.