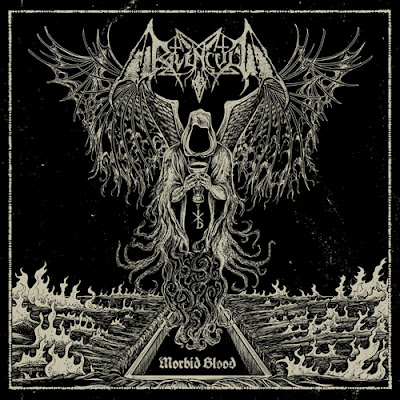 | Ancient gospel of the unblessed |

The cauldron of Ravencult had been boiling for about a decade when the information of a sophomore album spread, by the looks of it, we would be dealing with a precise, polished and factual record. Good compositional signs had already been known with their debut Temples of Torment and this one was highly anticipated by the underground scene here and abroad, as the skillful aspirations of the band were about to be shaped into sound. Morbid Blood came like a blast, with an excellent cover and artwork (the booklet reminds a lot of Watain's later albums) and slightly different music than the raw and arduous debut, more catchy but fairly cold in it's own way.

With an improved sound, the band has abandoned the primitive black metal approach many bands follow at their first steps (because it's cheap and accepted) and constructs a piece of well-written, personal compositions, relying on the notes and the headbanging moments instead of the poor quality. Apart that, the tracks completely present European tradition, this time closer to the black / thrash sound of bands like Desaster and Nifelheim, or Aura Noir.

The band has a talent in creating memorable riffs and Morbid Blood is full of them, when several choruses or rhythms might stay in your head after a few listens and while the music is not completely innovative, it's really distinctive. If a track comes up and you listen to it somewhere, you will recognize the band even if you haven't heard that particular track before. The record is not overburdened with introductions, acoustic parts and other silent moments, it's riff driven and created to move a little bit more when listening to it, instead of sinking into it's atmosphere at a cold corner of your house. Again, it's black / thrash, bravely stepping into the rock'n'roll area with some Venom references in songs like "In Sacrilege of Death", "Black Rites of Execration" and "Morbid Blood". I always feel excited to read the lyrics of the band, mainly revolving around darkness and satanism. A dose of grim poetry can be found here as well, featuring some killer lines here and there in the songs.

The tempo is mostly fast and sometimes uplifting in it's entirety of 37 minutes, mainly depending on the delicate guitar lines and bitter, distinguishable vocals. Ravencult does not stop for a moment to catch a breath, they throw one solid melody after the other, combined with violent words and punching drums. The album is at it's peak in "Snakes Crawl" and "Hail Revenge", my two favourite tracks, even though each one of them has something to offer. Morbid Blood might not contain breathtaking, life-changing moments, it might not be a classic in fifteen years or so. It does have it's own pace and offers plenty of entertainment though, worshiping old gods and having numerous above average ideas. I leave you with this: