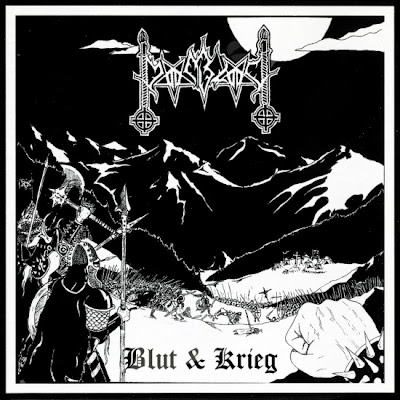 | Under the forests, the mountains |

Perhaps one of the most respected names in underground black metal, through hard work and many releases, with a firm stance for over a decade, they carved out their own name in the history of the scene. No other than the infamous Moonblood, the German act of Occulta Mors and Gaamalzagoth, still continues to have a strong impact even after they disbanded in 2004. Blut Und Krieg is their maiden full length album after many rehearsals and demos, originally released on cassette and later re-released by many companies in all physical forms possible that's it's now hard to recognize originals from zine / label copies. The originals, adopted by Moonblood themselves, were only cassettes and vinyls, since "CD versions were very easily accessible by everyone". This band is my own personal favorite, and the very first I heard of black metal. Maybe a little unorthodox beginning, but I am glad that I have discovered them.

True to the essence of unclean production, the band does not spend time perfecting their sound in the studio, with a purpose to create something totally primitive. Every instrument is audible and that's satisfying, but the mixing and mastering seems incomplete. Many fans have this band as a comparing standard when talking about how raw a different band sounds, but it's distinguishable and completely epic from the start to the end, don't think that it's noisy and unlistenable. The musicianship does not consist of instrument machines and there is no shredding anywhere, both members possess the vision and the talent to compose great songs of accurate lines, and not necessarily complex or difficult.

The album starts with an atmospheric introduction with interesting samples and a church bell . It takes less than a minute, but it is more than enough to create the right, dim and dull atmosphere. First track "In a Bloody Night of Full Moon" enters at medium speed , with simple riffs and drums, based on a melody of a synth and it's pretty epic. It can be compared with "Det Som En Gang Var" by Burzum, having the familiar style of Moonblood and quite good for the first track on the disc. The second track is called "Shadows" and it is relatively fast and more "uplifting", as in the introduction there is a 80s heavy metal riff with solid screaming, later including a good tremolo melody. The drums are faster and closer to the style of the genre than in the previous track. The "... And The Snow Covered The Lifeless Bodies" begins with a cold melody, which compulsively creeps up the main part of the piece, having nice guitar lines. It keeps a constant rate and no major changes during it's nine minutes of length.

The next track is called "My Evil Soul" and it's a track from a previous rehearsal they had recorded, one of the strongest tracks on the album . It's faster and more direct than the rest, the combination of orchestration and unearthly voice creates an awesome effect. The title track begins with a melody similar to "... And The Snow ..." and slows the album down again, as a nostalgic synth line shows itself. The "Kingdom of Forgotten Dreams", has interesting riffs and works as a standard Moonblood track. Then, "Under the Cold Fullmoon" is an amazing track. It combines slow-moving melodies with epic moments , all instruments perfectly coexist and the voice is incredible. The last track "I Am All" follows the footsteps of the previous one, with the same duration and intensity. The album closes with a two-minute outro, consisting of keyboards and vocals, without being anything special .

As a whole , the album is very good , and it has dedicated to one attention and time. The particular production is this that makes the assembly stand , which is quite dirty, but without burying a component of music. The vocals are a little louder than they should be throughout the disc, but not to a point that they ruin the result. Even though a full length might be irrelevant with these guys, since the production and sound of their albums is very similar to the demo recordings (anything cleaner is of no need), it's good to have some specific points of reference. Blut Und Krieg is such an album for this band so if you want to get into them but you're confused with the large number of rehearsals, demos, splits etc.. Start from here! Great band with a great admiration of their own spirit.