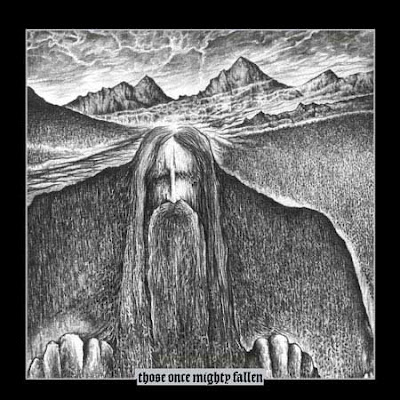 Sometimes, records get enormous hype before their official release and every last person interested into that particular genre is looking out for it, regardless of their taste on the band(s) and / or out of curiosity, they end up listening to it. It's not often but it's reasonable, since people want to be informed on the most important news of their scene, have an opinion on them etc... The split release of Hate Forest with Ildjarn was breaking and unexpected news. It described each blackster's terror and joy at the same time, for a result that had potential for a win or an embarassing loss, as everyone was excited, I know you hoped it is not a fiasco of two of your favourite bands, ruining their image and reputation. When you are informed that these are old recordings remastered, isn't there that awkward moment when you don't really agree with the label's decision but you can't judge either, if they are respected to the scene? Come on, when labels need money, they find shitty, forgotten rehearsals that the (by now famous) band hates, they remaster them and re-release them, hoping for any profit. Am I right?

The situation grows worse when one of the bands is Ildjarn, the epitome of disgusting sound. It's so dirty that it has divided the black metal community into two sides, the ones that consider all his work garbage and the ones that see him as the one and only purist and visionary. Ildjarn is notorious and a famous misanthropist after all. I have to admit that I would listen to this record and leave a sigh when it finishes, for no new music and yet new records, for recycling old glory, for not leaving one artist to rest in peace when they choose to etc.... One the other side, Hate Forest have been raped by re-releases of their hidden recordings several times after they disbanded, which is somehow funny, a band no longer active to release a demo, a split, a compilation and now a second split. It seems like they rushed it. It's natural that the label probably takes the band's permission for all these new albums, but I would prefer they quit the bullshit and get together for new music if they want new albums under their name. Hate Forest are excluded, since I am a huge fan of them and I can't take a black metal fan seriously if they haven't spent time on this fundamental European band.

Dilemma rises when the above thoughts spin around your head and at the same time it's Osmose Productions that organizes the release. It's not the non-existent rip-off label of your fraud neighbor, it's THE Osmose Productions. A look into their roster and history will help the people unfamiliar with it to understand the level of professionalism and accuracy of choices that goes on in there, so this isn't either a joke or a false statement. You are actually going to have a split between two of the most controversial but also approved acts in the whole genre, which is somehow,  a historic event. It might just be my overexcitement and big mouth, but still I was very curious to listen to this, since I like specific parts of Ildjarn's discography and loathe a fair part of them as well. There are times that I do feel the organic, nature-driven raw sound he intended to make, but it's not always undeviating and capturing as it should, resulting in a missed shot. According to the information we have, Hate Forest's side was recorded in 2000-2001 and Ildjarn's side in 1994.

Starting off with the first six compositions by Ildjarn, which are, as relieving as it can be, something more than astonishing. Truly amazing, straightforward tracks of pure, delicate black metal for every fan out there. The atmosphere, the feeling of isolation, the hatred for mankind's idiocy, everything flowrishes wonderfully in it's most primitive and basic form. This might be the root of the tree for sure. This material belongs to the solid side of the band and delivers equal strength to Darkthrone's unholy trilogy, equally dirty, destructive and unhuman. The noisy guitar sound, the clear bass, the definition-of-the-genre immense vocals, the banging drums and some additives of keyboard melodies that remind of nostalgic, medieval ambient is what the package contains. There is a decent proportion of synths in the songs, as much as needed, without deviating from the original angressiveness. Track two "Ashes of Stars" and the short "Gates to Bottomless Halls" include some classic Norwegian riffing, while "Birds of Misty Dusk" and "Mountains Covered with Snow Forever" are more atmospheric, in their own unique way. "Forest Crypt" is the opening track and goes through all the elements of Ildjarn's music during it's seven minutes of length.

Descending further into Hate Forest's offerings, they open with "Cimmerian Shadows", which is a beautiful dark ambient piece as an introduction, pointing out the closure of the first part of the record as well. I don't know what recordings are these and under what treatment they went, but it's a crystal clear sound, similar and even cleaner than some of their own albums. The signature of the band shines from the guitar work again, which sounds and feels like Slavonic black metal, a bit less furious than the first but largely epic. The vocals are similar to regular Hate Forest, which might sound unusual to a person that has never listened to them before, because they lean towards death metal. These are deep, old school growls for the most parts, could easily fit to any death metal band of that period and I can't say I would prefer traditional screams, since the instrumentation goes along with the voice perfectly. I liked the first three tracks after the intro, being a great agglomeration of Hate Forest's own style, in both fast (track "Howl of Hyperborean Winters") and middle paced tempos (the penultimate eight minute "Crowned with Crescent Horns"). I was a little dismayed by the beginning of the last track "Abyss Wanderer", which reminds me of weird electronic genres I don't like, as it contains such synth lines at the background. That's why it's the weakest track of their side to me.

I would laugh if you had told me beforehand, that I would enjoy Ildjarn more over Hate Forest (excuse my ignorance). Both bands demonstrate the best of their abilities and their personal approach to the genre, writhing precisely between atmosphere and roughness without getting too repetitive at all. Of course these tracks all come from the long gone past and that's why I enjoy them even more, because it's unheard music of the best era for black metal by two really good acts. Whatever doubts I had before getting into this are gone now and I salute Osmose for this creation, as well as the bands for the original compositions. Under it's sharp surface, the record depicts the nature of it's harmony, bitter and very artistic. Highly recommended for the fans.