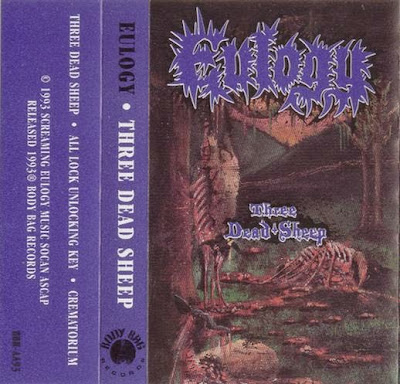 This is a band trampled by time and with very few information to look for, other than the Metal Archives profile. The band had a short life of five years with one official release and a faceless demo, making this EP the only record available by them. There are many bands with the name Eulogy but only these guys come from Canada, just to avoid the confusion. The band landed a record deal with Body Bag for Three Dead Sheep, which is a label as unknown as the band.

These guys embody an old school and enticing form of nineties death metal and especially American death metal, from it's compositional ideas to the song structure and overall sound. A sound that has not been buried under poor, low badget production, in fact it's actually quite legit and at the same level as the sound of other big bands' full lengths around that time (Kataklysm for instance, who are also from Quebec).

Most of all, there is an audible, stomping bass in every song, which is important when many bands just ignore it. The bass lines are clear to listen to in most parts of the whole mini album. The work of the drummer is fairly fascinating, with awesome fills and good blast beating, most of all for his busy lines and awesome  guitar followings. The two elements I am usually let down by, the drums and the bass, are translucent and unclouded, given the proper attention and played sweetly. The guitar always deliver solid riffs, very much in the spirit of their era and location and under a lawful variety, while the rooted growls sound like they come from the depths of the pits, brutal and demonlike.

It's possible that the title Three Dead Sheep referes to the three songs of the EP, I don't know what they have in common with sheep or their corpses, but still it's a funny title with a great cover artwork. There is one sample of screams used in the introduction of the self-titled track which does the job for a short, creepy beginning of a good journey. I enjoyed all three tracks a lot, but mostly the last one "Crematorium", since it has a great, big balled groove in some of it's parts. Also, it has a solo-like moment, something that is missing from the EP and is somehow surprising. Many bands had solos then and still do.

Who knows why Eulogy had to split up with such few tracks produced? I am sure that if this EP was a full length album with eight or ten tracks, it would be a cult album for death metal archaeologists today and it's first press copies would be rare and expensive. It might be a bit early to say that this is one of my favourite pieces of forgotten extreme metal, but it's definitely on the list. You won't be disappointed.