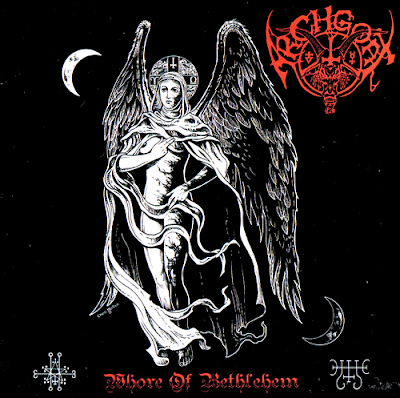 | Against all white light |

Each genre and sub genre is characterized by a couple of breakthrough bands that first started with that particular music, motivating many others with their albums. In a way, ungraceful black / death metal is not an established subcategory (as symphonic black metal for example) but there is a whole scene based around it, starting back in the early nineties. Now, it's true that most of the bands in there are nothing more than whining drunks with a very immature and easy to go touch in their stuff, which consists of a lot of swearing, genitalia and upside down crosses. Tell me when I have to get scared.

One of these milestone bands for this genre are indeed Archgoat. Despite having very few releases and only some years activity in 1989-1993, it seems to be one of the major influences around here. Coming back from the dead in 2005, Whore of Bethlehem is in fact the debut full length album by the band. I would be happy with a trve kvlt record in 1992-1994 because it would surely be worshiped later on, but hey, it's never too late. So, what do we have to expect from the first full album by Archgoat? Not much have changed and it should stay that way, with the dudes focusing on pure madness and bestiality for about thirty five minutes. If you have heard their first EP Angelcunt (Tales of Desecration) and loved it, with a silent wish of a longer record in the back of your mind, this is for you. After a nonsense MCD in 2005 which almost buried them alive, they pick things up right from where they left them in 1993 and put out a -by all means- solid record.

Of course, the genre is somehow doomed to mediocrity inside it's own borders, since bands like these never demonstrate something unique or fascinating musically. I doubt they give a damn about it either, since the sole purpose is to be ugly and attacking, so every bands that succeeds that can be considered "good" by me. I don't have a lot of complaints about Whore of Bethlehem, as it balances nicely between pure blasphemy and musical structure, without giving emphasis on one of the two alone. The same ingredients are used once more, from the filthy black / death riffs, to the monstrous vocals and the hard hitting drums, as well as a steady bass sound, is the alpha and the omega for the band. The sound of the album is low pitched and scourging, lacking variety for it's own good. The old but adored church bells and synths are included in a couple of songs, like in "Dawn of the Black Light.

It's not creative or rich, but it feels great to listen to. It's typical Archgoat but in a larger proportion, dressed in a dusty and hostile production, putting it right in every playlist, when you feel like sacrificing goats in the name of Lucifer, while cursing religion in any way possible. You are not going to fall apart from it's sheer musical genius, but surely it has the needed brutality and rawness.