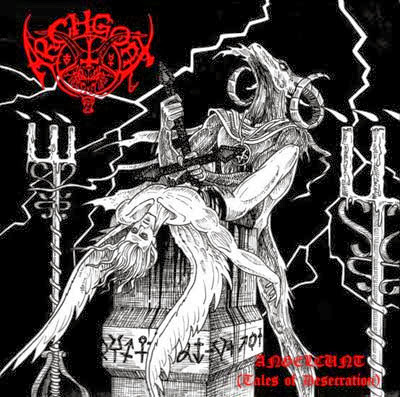 Finland's Archgoat were active during the second wave for a few year but disbanded in 1993, only to regroup in 2004 and continue the bestial black / death metal madness they had been spreading from the beginning. Their music is not that hard to get into, having plain ideas and delivering them as raw as they can every time. After a couple of dirty demos, they released their first EP Angelcunt (Tales of Desecration) in 1993, which has seven tracks and lasts only thirteen and a half minutes.

For some reason, many bands of this style use intros and outros in their records, most of the times being aimless and vapid in content. While this is one of the most unconventional forms of black metal, they use half a minute or a whole minute tracks with random screams and sounds, doing nothing at all. This is also the case here, track one and seven (the first and the last) are just boring instrumentals. The drumming is right on the spot, very organic with good fillings. Unlike many others, it has it's own character here and it's damn audible. The sound of the guitars and the bass is pretty down tuned, to create an unclean sound that they might name as "unholy", for that's what the band is all about. Even though there are no lyrics available, it's not hard to recognize the anti religious, blasphemic concept Angelcunt includes. They are indeed tales of desecration.

The main part of the record starts with a heavy track named "Rise Of The Blackmoon", which is one of the best in the record as well. It depicts Archgoat as a whole too, focusing on filthy riffs and monster-growling vocals, while there is a really nice bell sample in it's middle paced moments. "Death and Necromancy" includes the same amount of aggressive and uncompromising fury, switching between a fast and a slow tempo. It also has some solo like guitar parts that remind a lot of the death metal solo techniques of that era. The fourth track "Soulflay" starts of with a slow, groovy line and contains a church organ synth behind the instrumentation, as well as some demonic voice notes, a bit different than the regular growls they are using. "Black Messiah" is a faster song in the same spirit as the previous track, while "Jesus Spawn" is quite shorter than all the rest and quite fast as well. Most of these tracks had been on their previous demos as well.

Even though the production and sound of the record is crummy, I didn't think it got repetitive at all, since they are constantly changing speed, keeping it a little bit more interesting. It draws influences from the early days of death metal (especially demo recordings) and the few but sweet samples and synths also add some extra points to the whole result, granted that one completely overlooks the instrumentals, as I did. I say it is above average and a crucial release for this genre, as Archgoat has influenced a whole lot of bands that came out later on.