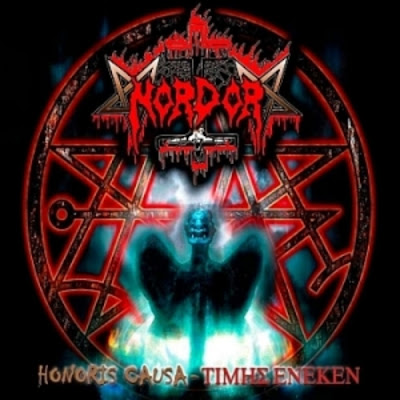 Nordor "Honoris Causa"
Summer 2008, Under the Sign of Garazel Productions

Not seeing these guys at the tribute to Greek metal in the Greek Metal Hammer issue several months ago was frustrating, since they are one of the bands that can't be left out in such articles, with more than twenty years of history in the country's death metal scene. Their formation took place in 1989 and they have only released two full length albums all these years. This is their debut, which was anticipated since its announcement. Honoris Causa means Τιμής Ενεκεν in Greek, which is a phrase that translates as "to give honor".

Even though the construction of the album reminds of grindcore albums, meaning that it has a bunch of short length songs, the music isn't near that genre at all. They have been storing negative energy for years to release a powerful and hateful 17 track machine, which is made of pure death metal and occult references to Necronomicon in the Greek language. They have been described as satanic death metal numerous times and it's not completely wrong, since they use various samples of anti-christian and ritualistic content, not only in their lives but also in their albums. With so many tracks, Nordor have the space they need to insert some preludes without ruining the ongoing brutality, which is delivered by 1-2 minute tracks, as well as a couple of  3 minute ones. The band reflects the early nineties american death metal scene and bands like Morbid Angel or Deicide, who also had religious themes in their music. Apart from that, some progressive elements appear in a hurry here and there.

I can pick on some very interesting ideas on various songs, but the whole vibe of the album leaves no chances for them to flowrish, mainly because of their length. It seems as each song is starting to develop, and then all of a sudden it ends and everything fuzzes out. I would prefer fewer and longer songs, which would probably mean more complete compositions and a better result in total. I have this problem with almost all albums like this and yet it was not much of the problem this time, enjoyable as it is. The production of the album is pretty shallow as well and it buries the musical quality of the band, i don't know if it was their choice to do so or what. The guitar lines are full of interesting riffs and this combined with the deep, pure growls of Lordwinter, keep everything interesting until the end. I was not satisfied with the sound or the playing of the drums in some songs and was amazed in others, it feels like they are subordinates to the rest of the instruments, even though there are no major mistakes or flaws.

The album creates its own cult atmosphere with the Incantation fueled music, the Necronomicon chants and the dirty production, and that's what gives it its own character. The songs don't lack brutality or speed and they would get the job done for any death metal fan of the nineties, but still it has some negative points. It is a bit hasty and perky, not getting into each song and taking full care of it but more focusing on the album as a whole. If you listen to the album from start to finish, it's more likely you enjoy it than listening to a couple of tracks.

Track listing:
1. Absorption
2. The Invocation of the 4 Gates
3. Equalization of Powers
4. Walking on the Circumference of the Circle
5. The inevitable Unexpected
6. The Book of the Invocation
7. For the Love
8. Maskim Xul
9. Condemned to be Acquainted with
10. The Spirit of the Possession
11. For the Strength
12. The Exorcism of Ia Andu Eni
13. The God Neglect
14. Seven They Are
15. Affliction for Those Who Left Us Alone
16. Purification
17. Offering to the Uncurbers