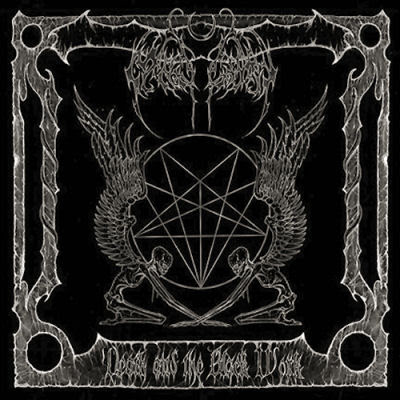 Nightbringer had already been around for almost ten years when their debut full length album "Death and the Black Work" was released in 2008. They are by now well known for their contribution to the USBM scene and their daring occult concept, which is present in their first work as well. I did listen to the album when it was first released and Nightbringer were not that popular, and it seemed like a cool record with bits and bites of value, but not something i would choose to listen to again anytime soon, if anytime. As Nightbringer built their own cult name in the scene and now the whole land knows them, i decided to revisit the first vile recordings. Today, it's just an unimpressive record.

The band is heavily devoted to the occult ideology and they are influenced by that in the aesthetic and lyrics of their music. I do like the orthodox style and i have high hopes of such bands, since they ought to breed darkness in them and deliver it via dim noises and melodies. However, i can't get any feeling out of this one whatsoever, even after several listens. The whole package (artwork and lyrics) is rather simplistic and uninventive, which brings up wonders like "Is that what they were preparing the last decade?", "Was this band formed the day before they released this?" or even "These kids listen to too much Deathspell Omega". An experienced listener would not fall victim of the superfluous mysticism and blackness, especially when one would get into the music itself. I've seen various comments about how this is a trendy black metal album etc... Its not completely false, but not correct either, considering that they proved their commitement the following years, but not with this sloppy and poorly written album. Because of the fact that the music is rather weak, all the occult characteristic seems like a fancy addition. I have to admit that i can't derive much from the actual lyrical work here, since i'm not that educated on the subject. I'm not getting skullcrushed by the artisticly violent music it shall have, as i do with other bands of this kind.

"Death and the Black Work" clocks up to one hour and five minutes from seven tracks. I was prepared for long songs and that's what i get. A disappointing aspect of that matter is the speed of the album, which is always middle-paced and repetitive, like the music is trying to hide behind the dusty production, like its afraid to get a little faster and heavier. The riffs are slow and dissonant, trying to create that occult atmosphere but failing, whereas the bass and the drums are scarce. There are a couple of fast parts and they don't bring anything new to the table, because of the drowning overall sound the album has. I had a hard time looking for a decent drum line into the mass of mediocre and lifeless plays and i'm confident that it would not sound very different if they were not at all there. The variatons from blast beats to slow and fast paced lines would have a certain beauty, if the production and the rest of the instrumentation weren't that brain entagling. They are focused on the guitars more, trying to create multiple riff layers as the compositions develop (Darkspace also attempt it, but with much better success). There are some interesting guitar lines, randomly scattered around the confusing main body, close to their ideal bands like Deathspell Omega, lacking the originality and variety the latter have. As if all that was not enough, the record is also way too long to be bearable, sooner or later you'll find yourself yawning and sighing in silence as if it will never end. I was begging for it to stop and i had the two 14 and 10 minute last songs to get through.

There is a short introduction in the beginning of the first song, something like dark ambient/noise to help the stench establish itself, but it does not have any effect, with its repeating samples and tape-recorded-like sounds. Various dark ambient parts are used throughout the album, but they don't move the earth any more than it already moves. So, was there anything i liked about it? Well, i can't say i did not enjoy a part of it, simply because i has been played again and its easy to dig. And because i like the bands they tried to immitate. If you skip the intro, "Caput Draconis - Black Saturn" is a solid song and so is "The River Lethe", as well as the beginning in "Of Silence and Exsanguination" which shows some vague influences from drone doom metal. Even if these parts seem attractive to me, i would not exchange a couple of good moments with an hour long below average album.