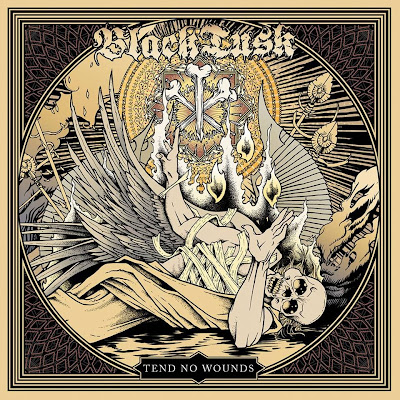 Black Tusk are known for their talent in creating riffs, they already have three damn good full length albums out and about. They are energetic, electrifying and addictive, because of their easy-to-go-with rock 'n' roll sludge, they come in handy when you need a trip, or a good time generally. These are exactly the elements this new EP lacks, throwing it down in the dungeon of mediocrity.

For some reason, every instrument sounds weaker to me. The guitars are shy, like they are afraid to play faster or heavier, at least more consistently. The drumming is pretty bland, even the vocals do not have the power they can have, if one considers their first albums. As a combination, it feels like Black Tusk are for some reason holding back. The production can't really help either, since the tracks are sloppy, poorly composed and unoriginal. I can't feel the movement i am feeling when im listening to their other stuff, the whole thing sounds like something a newcomer school band would release.

After a short riffing intro, the first song "Enemy of Reason" has a typical riff that literally anyone into metal could think of. I can't recall the times i've thought of that riff in my head or heard it in various hardcore bands, it would be nice if it was the first time a band played it, but it has really worn out. Surely not what one would expect from this band. The second song "The Weak and The Wise" is even more mellow, and the starting riff reminds of Sweet Dreams. FUCKING SWEET DREAMS. Whatever happened here. These two tracks have the major flaws to me, then follow two more that have nothing to offer, so i won't hesitate talking about them at all. A small portion of hope was restored with the last track "In Days of Woe" , which has a middle-paced but interesting riff, that might just sound nice because the rest of the tracks are worthless.

I don't know if they did that intentionally, because there is not much experimentation here. I was hoping for a better outcome from this band, and i will listen to the new album when it comes out, even though this new record was a rabbit punch for me.