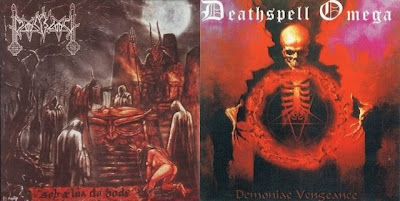 Both of these bands have their own popularity in the scene and they are respected by many, for their ideological stability and musical consistency, with releases way above average each. This union took place thirteen years ago and it was one of the last official Moonblood releases before they disbanded. Of course, all of us know the path Deathspell Omega have followed since then and we are very pleased about it.

Even if the official copies were limited to vinyls only, some other distros printed bootleg CDs of it and i happen to own one of them. Kris Verwimp was the one that designed the spectacular art of the Moonlbood cover, a famous illustrator for metal bands. The split contains four Moonblood and three Deathspell Omega songs, lasting a little bit over fourty six minutes. I always have high hopes for quality bands like these and once again i was not let down.

The ceremony begins with the Moonblood side, which contains, to me, some of the best songs they ever recorded. The production is deliberately as dirty as it should be to give the appropriate feeling, and shrieked vocals combined with yells and screams make the tracks even more obscure than they were with the freezing instrumentation. Some of my favourite black metal riffs are contained here, and all the songs are amazing, if you are in the mood. The known habit of black metal artists to wander around forests (which is often mocked by everyone) aches in these tracks, and it wakes the urge inside you to do it yourself. "A Silent Dream of Impurity" and "I Hail The Night" are my favourite Moonblood songs and "Forgotten Spells In The Forest" is right behind them. The titles and lyrics are quite graphic and have become a cliche today because of the repetition, but no one reaches the level of these two guys.

We continue, as the Deathspell Omega side rises. It is definitely straight forward like most of the french bands back then, with very nice variations and riffology. It gives away a bit of the majestic sound they would produce some years later, but it is not fully shaped by that time. They can be described as the LLN descendants, with about the same sound but extremely improved musicianship. Three solid songs showing the first steps of this band, a must for the collectors.

If i was to compare the two sides, i'd definitely go with Moonblood. Their stuff here are mindblowing, so good that they make the mighty Deathspell Omega sound opaque. I enjoy the whole split and it has always been in my playlist, because of the effort these two bands have put into it. The fact that i prefer the one band over the other, doesn't mean that i don't like them both, a great collaboration that every black metal fan should listen.