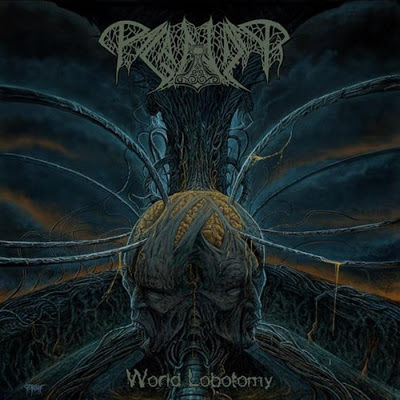 First of all, again, the cover art is amazing.. Paganizer are the main project of the person that holds on his back, like Atlas held the dome of the sky over the earth, maybe the whole swedish scene. Or a major part of it. Seriously, this guy plays in so many bands, you can't even know if there is something he has not been involved in over there. So many bands i've liked and then later realized that they are just projects of the swedish death metal multimachinegunner, Rogga Johansson. Zombified, Revolting, The Grotesquery, Putrevore, Ribspreader are a few to name. The guy is preparing an album collaboration with Speckman of Abomination / Master. Tell me he's not working.

I've always liked Paganizer, i stumbled upon them way before i started liking death metal or knew about him, they seemed and sounded nice, it just stayed like this. I enjoy some of their albums like "Carnage Junkie" and "Into The Catacombs" very much. When someone releases albums with so many different names at a short period of time, a sane man shall be dubious about the originality of all these records. Luckilly, Rogga generally doesn't disappoint on that section. So far, he has fetched the fans with a shitload of tasty albums, some released the same year, some under the same project or whatever. All in all, this is the Rogga metal everyone knows, only that its the original band that he first started from. Its not a side project. Its THE band.

The songs are swedishly in the deathrash territory, with a couple of cut-throat moments. The songs last around three minutes each and it is true that they have a well known amount of brutality, produced by the gnarly growling and the Entombed-ish riffology. He is not to be blamed, but sadly, it just didn't grow on me this time. Not just because it is something all of us have listened before or other common and similar excuses, i just couldn't really smash my desk while listening to it. I feel like thats me and only me, so i can objectively say that this is a legit Unleashed / Dismember worship, and the people that seek that particular sound, they have it. Among so many projects of his and other bands too, this album feels a bit vague and forgettable, soon to be forgotten. I admire Rogga for what he has offered, so i will stick to the albums that are worth it a bit more than average for me.