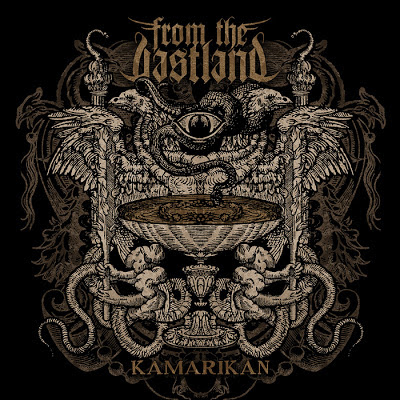 Any act that comes from an eastern country is respected to me. The society of fanatic religious people over there doesn't leave any opportunity of artistic development, since all arts are evil and satanic, blah blah blah... And of course, they hunt down the wrongdoers. This band hails from Iran and its a one-man project, even though now the mastermind behind it has moved to Norway and hired three other musicians. According to MA, From The Vastland has played live in the Inferno Metal Festival this year, with members of Gorgoroth, 1349 and Morbid Angel. I hope you are turned on already.

Kamarikan is the second full length album in two years, and it was fully composed and recorded by Sina (the guy behind the project). It consists of seven songs that run forty three minutes of relentless black metal madness coming from a very talented musician, as it seems. The compositions contain legit heavy riffs with some moments of melody and others of Darkthrone-ish rawness. The mixing and production touches perfection and creates an amazing atmosphere, which is always welcome.

Listening to the tracks, i have to say that i admire Sina's vocal work. He definitely is eager to scream and then scream a little more, showing off a powerfull windpipe. His vocals do not crush down or faint anywhere, they are steady, as deep as they should be, an excellent example of of a solid black metal voice. There are a few growls here and there, but he wisely does not overdo it, spilling them all over the tracks. Another interesting aspect of the project is its concept. The lyrical theme revolves around persian mythology and zoroastrianism, both not very common subjects to talk about. I think all fans should check this, it is a dignified effort and it surely deserves a bit of attention. He participated in "Freedom of Speech - Music Builds Bridges" festival, which shows the supreme role of art in this world.

Email ThisBlogThis!Share to TwitterShare to FacebookShare to Pinterest
Labels Black Metal, From The Vastland, Interesting