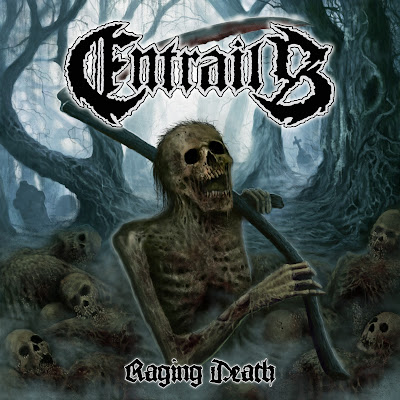 This band has come back for good and they are hard workers after all. This is the third album by the Swedes in four years and since i have talked about their other albums here, i could not possibly skip this one. For those that have missed the past posts or this band generally, they were formed back in the early 90s but they disbanded with zero releases because apparently they "were never satisfied with their demo recordings". Metal Blade has taken care of the album's distribution in a bunch of different formats, colored vinyls and digipacks, and they include a bonus track, which is a cover of Marduk's Dark Endless. Now that is an interesting idea and i am going to check it as soon as i get my hands on it.

This album is closer to "The Tomb Awaits" than "Tales From The Morgue", following the same steps and formulas they used for the previous effort, no exceptions made at all. The subject of originality in situations like this is overanalyzed and it depends on the listener, so i'll tell you what i think. When it comes to old school death metal, especially from the lands of Sweden, if someone wants so listen to something different, he's looking for it in the wrong place. That's why it's called old school, because it is played that way, and it can be played good, here is the proof.

Entrails are the bastard son of Dismember and Entombed but they do not fall into the trap of becoming copycats, its not original but its amazing. I was skeptic when i saw they moved from FDA Rekotz (a label that has my full support and respect) to Metal Blade, since, yes they would have more money for promotion and recordings, but these big labels tend to soften the edges of the angrier bands. Im more against Nuclear Blast on this, Metal Blade is relatively decent, but still. Not only this didn't happen here, but also they used their goods so that they improve both the production and the composition structure. The tracks are groovy with hammering swedish riffs and drum beats, the growls are deep and painful, the speed of the album is at the correct level, so in general, it rocks.

I believe the amount of love a fan can show this band depends on how much that fan misses the 90s death metal scene. The reason even fans of the modern sound might enjoy it is that it does have a crystal clean production and that makes it more attractive, if you ask me. While you are waiting for your favourite swedish death metal bands to release an album, if they ever do again, you can try these dudes.