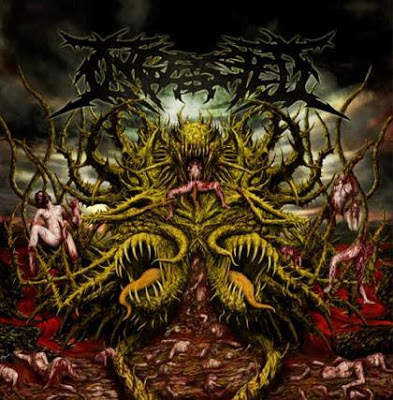 
I think the cover art for this album is elegant enough for this blog. And im glad. I love this fact with brutal death metal bands, they usually have extra detailed gore cover albums done with extreme talent and precision, and when you start listening you feel like they recorded it with broken tape players.

Thats not what happens here though, the music is as extreme as the cover, awesome band that has released awesome albums, i don't care if they label it under the deathcore genre or anything, they have some good ideas for brutal death metal and when they make songs out of them, im happy. This debut release is a clear death metal album, the second one has more deathcore influences, but its still pleasant to listen to. Its one of the bands that im never bored to listen, the heaviness just feels good inside.

Don't expect the noisy squeals or the shitty drums of average BDM albums, they have a solid production (Abominable Putridity & Pathology) and the album lasts over 20-25 minutes, again unlike other albums of the genre.
on December 06, 2012