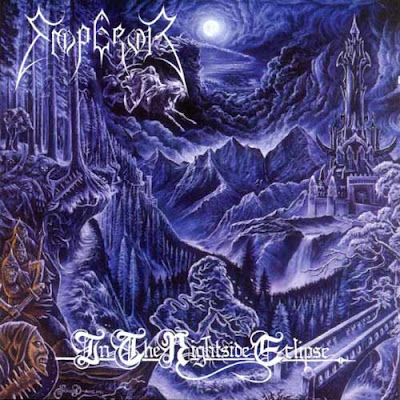 How does the blog look with the new layout? I hope you like it. I was bored today and came across some ideas of what to put together, so here it is. I will give the info on where i found the background/header/icon pictures, in case anyone's interested.

On the album now, Emperor are not new in the metal scene and they (and their musicians) have had a great run the last 20 years or so, before they split up, this debut depicts the full awesomeness of what the guys could do, it is considered one of the top albums in black metal and more, since it lacks nothing whatsoever. Ihsahn is a talented keyboardist and at the time he had the youngster's blood burning inside him, these combined with the black metal aura that was around Norway then, it was almost inevitable that he would make extraordinary synths. There is a great job done on the lyrics too, not to mention how much inspiration one can draw from the compositions here, as it indeed happened in the later years. Personal favourite when it comes to them, im sure im not the only one.

This is not the first press of the album, its a special edition that was released via Candlelight in 2007, it contains an interview of the band, a poster, lyrics booklet and a special CD case, they also released the rest of their albums like this, look out for them, its really cool to own one of these in your collection. There are two bonus songs in this, a cover of Bathory's "A Fine Day To Die" and a cover of Mercyful Fate's "Gypsy".
on December 01, 2012