Whoever listened to Utkena's EP last year, The Firmament's Hand, should have been very positively predisposed for their debut full length Nex Fornix, released this June on Pest Productions. They offered an even more compelling listen on this record and showed that they are currently in a great orbit, as a band that is quickly rising and growing with top-notch material. References can be found when listening to their music, yet the sound of Utkena is definitely unique and sincere, making them a group that is worth the attention of everyone in the underground. In this interview, concepts behind the band and the album were discussed, as well as the ongoing situation and their plans.

Greetings and welcome. How are you coping with the ongoing pandemic so far?

Greetings and thank you for the interview. There is generally a strange situation with the pandemic. More hours at home means more time for music and songwriting,  but also more time with our own people. Maybe this whole situation is also an inspiration for our next album.

How did you come up with the band name and what does it mean?

The name Utkena came after a lot of searching since you had to find a name that no other band has (you understand how difficult that is). Essentially Utkena is a corneal snake that according to mythology was a powerful being that inhabited the underworld and conveyed messages from the world of the dead to the world of the living and opposite.

Congratulations for your debut full length Nex Fornix. I am sure the feedback must have been positive so far, how have the first couple of months after its release been for you?

Thank you for your kind words. The truth is there has been a great response from the world. Either with comments and messages sent to or by the purchase of the disc by Pest Productions and Bandcamp. In a little while, we'll have the record in our hands to promote it.

Nex Fornix translates to Death Vault. Why was this title decided, is this a concept release?

We believe that man has not come to terms with death. As an idea we thought of it quite a bit and as a theme of the album. That's the point anyway. The compromise of human thought in death and non-existence.

I can see Lovecraft as an influence on Utkena. Do you have any other non-musical sources of inspiration for your material?

Great work on sampling the drums on the record too! Have you found a permanent drummer by now? While Nex Fornix crushes as it is, would you turn back time and record it with real drums if you could?

The truth is, if we had the chance to rewrite the album with natural drums, we wouldn't do it. First of all drums were written first and then we build on them. So as you can see, that would be hard to do. We have not yet found drummer because this type of music drummers are few and play in other bands. We could find a session drummer, but we'd rather have a permanent member who likes what we're doing.

I hear in Utkena a mixture of Icelandic black metal and Ulcerate, with a thick atmosphere and through your own personal approach. What current or old bands do you admire in the scene?

The fact that we remind you Icelandic black metal and Ulcerate only as a compliment we can take it and thank you for this. There's a lot of bands we like. We hear and other kinds of music, and our influences may be from other kinds of music. But we will not hide the great love we have in Ulcerate, Mgła and Sinmara. 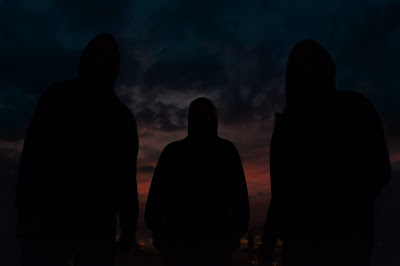 Has any material from your previous band Septagram made it to the album? Or is Utkena a completely different entity?

Utkena were born from the ashes of Septagram. There's nothing in Nex Fornix from the past.

What do we see in the photograph of the album cover and how does it relate in your minds, with the title Nex Fornix?

The picture's taken by us. We wanted the whole record to be made by us. We saw this scenery and loved it. We want to let people listen the album and make their own thoughts with the album cover.

Your debut EP The Firmament’s Hand was released last year. What new elements do you bring in Utkena’s music with Nex Fornix?

First of all we have much better quality recording in Nex Fornix. After all we made more atmosphere in our music and more complicate riffs.

You have chosen to use both Greek and English lyrics in one of the tracks in that EP, namely “ΦλνΧ”. A wonderful track, I was wondering about the meaning behind the title and to whom are the lyrics directed to?

We love ΦλvX for many reasons. One of all reasons is the Greek lyrics we use. It’s difficult for other countries to understand the language but we wanted to write Greek lyrics. The “person” behind the meaning of lyrics is the Time.

Do you produce your music yourselves? Both releases have an amazing production.

The production was made entirely at home by us. We didn't want our music to be altered by one producer because we couldn't transmit what we want to someone else.

The track titles of the new record are also intriguing too. Are the lyrics available on the physical formats or will you release them online? I would love to see the story behind “Temporal Sea”, for example.

Soon we will upload the lyrics of all songs online. Unfortunately, we couldn't include them in the physical work.

From absolutely any musician in the world, with whom would you most enjoy collaborating with?

Like we said before, we have a predilection for some bands, but with them it's a little difficult. There is some talk of a split in the future with a band from Greece.

Is there any new Utkena material in the works these days? What are the next steps of the band?

We have ready material for the next album. The production process will begin in the new year.

Thanks for your time! Feel free to close this interview any way you want.

We'd like to thank you again for the time you gave us and for your kind words about Nex Fornix. The best is coming.