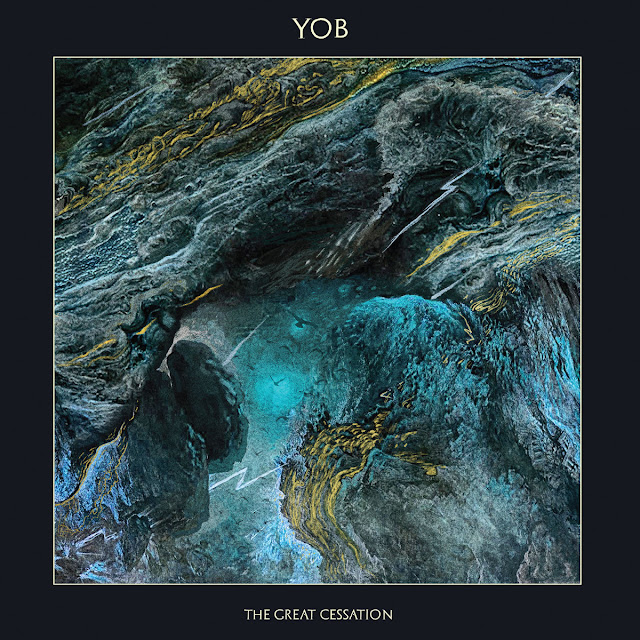 I recently went through Yob's 2014 masterpiece Clearing the Path to Ascend, several times on repeat throughout an evening while socializing with friends. In a sense, the balance in this band's body of work is unparalleled, the sound grows all around the speakers and becomes addictive to the extent you'll not notice yourself nodding after some time of listening. And while the elements employed are, to the purest, a well known combination of sludge / doom and post-metal, I can't think of many other artists that can touch the stars with flawless material, through hypnotic atmosphere and overwhelming talent. Yob's break in 2005 until 2009 feels to me -since I have no clue what actually happened to them during these years- as if this musical bull took a break only to empower and build momentum by focusing on a target, lowering its head and scratching the dust below. And that target was the whole underground scene, heck any subgenre around metal that dares to take it slow.
The Great Cessation starts off with with one of the best tracks they have ever written, "Burning the Altar". The quintessence of crushing guitar lines, Mike Scheidt's vocal range is absolutely insane in whatever sound he chooses to make, from the screams to the growls or the cleans, it's structurally interesting and totally, totally heavy. The rest of the record doesn't stray from that path either, by going through tracks like "Silence of Heaven" or "Breathing from the Shallows" you can't help but feel the weight of the world in your shoulders, and there are no human words to describe the majesty of that 20 minute, self-titled track at the end. The 2017 reissue of the album featured a couple of more tracks, from which I particularly liked "Pain Like Sugar" for the hefty melodies, but as a whole each time I listen to this release I feel it has something more to give me. Very few records actually deserve a 10 out of 10, and in the case of Yob, it's even hard to choose which one from their discography would earn it. This is the definition of perfection.
Listen to The Great Cessation:
στις June 15, 2020