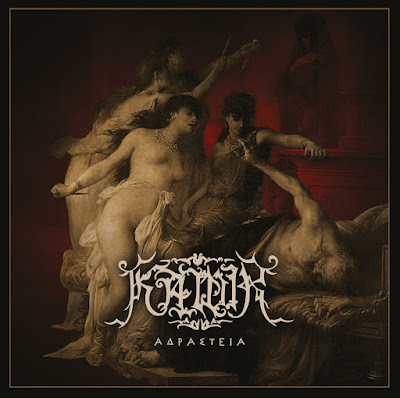 There is a distinct difference between Kawir's albums of the 00's compared with the 10's, when the band made a significant success with Ισόθεος in 2012, which might be their most well-crafted record to date and featured a production slightly more accessible to the underground metal scene. Since then, they have been laying on a bed of roses with a series of fine albums as well as world tours on their backs. Of course, the recognition is not uncalled for, as they are one of the first Greek black metal bands and one with a better integrity in terms of music, so they deserve whatever comes their way.

Among many Greek black metal bands, they have always heavily leaned on Ancient Greek mythology with album concepts and the feeling of the music, by far more than any other popular band (there are some obscure projects with strong connections to these aesthetics, you should look for them yourselves), and it has stayed like that for more than twenty five years now. And since this area is a bottomless pool of hints for inspiration, Kawir will never run out of conceptual ideas for their records.

Adrasteia orbits around the female figure, and the title itself (αδράστεια in Greek) refers to the Goddess of revenge, which also connects to many of the themes of the tracks, which have to do with various macabre stories of Ancient Greek mythology involving women. The cover artwork is another piece added to this puzzle, revealing the thematology of the record. Kawir often use native language lyrics in their tunes and this is heavily used in Adrasteia as well, not to mention the flutes that directly relate to that time.

Musically, we find the band releasing a follow-up to a couple of very prosperous albums and it certainly doesn't seem to stress them at all, as they still sound confident and convincing in the beginning of the new decade. Each track has its story and it's a pity to skip any of them. Their structure is very characteristic of Kawir and quite distinct from the start with "Tydeus", a typical solid Kawir piece. I felt strong Rotting Christ influences in "Atalanti", while the blend of middle paced parts, epic melodies and harsher moments, flute sounds and backing choral vocals, is what puts Kawir on top of their field.

Clean vocals are introduced in the record (e.g. in "Medeia")and handled by Alexandros of Macabre Omen, while the one of a kind, impressive vocalist Lindy Fay Hella from Wardruna is doing the clean vocals in "Colchis". This track is very much in the spirit of Wardruna, with no distorted guitars but folk passages and a repetitive tone, standing as the equivalent Greek spirit of Wardruna, that had me thinking how it would be for Kawir to release a full album like that. That would be really amazing.

"Limniades" and "Danaides" are also amazing tunes, with the latter being quite intense and borrowing black metal elements from Northern parts of Europe, as well as featuring guitar solos of Ashmedi from Melechesh. While "Colchis" was a definite highlight for me, the more standard Kawir compositions were also significantly above average and well balanced tracks to listen and re-listen for a long time. Adrasteia is augmented by a set of amazing featured artists, and keeps the spirit of the band high, who haven't disappointed and will be worshiped by fans of the Greek black metal scene.