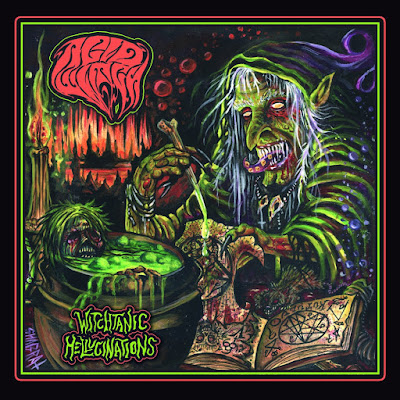 I listened to Acid Witch's most recent single To Magic, Sex and Gore, which was released last November, and it feels as if nothing has changed since their first days. The band still uses the same kind of song and album titles, with the same music coming from dudes who obviously live in a state of constant Halloween. They have stayed with Hells Headbangers for some time now, which is a perfectly fitting label for them and they have built their name within the underground the last ten years.

By writing about one Acid Witch album, one has covered significant parts of their other albums as well. Witchtanic Hellucinations is the one I have heard the most, and then comes 2010's Stoned, because after that I distanced myself from following the band, yet with all its weaknesses, their music is enjoyable to an extent. The mix of slow doomish lines, with the heavy use of 80's horror keyboard samples and death metal growls, sounds pleasing in theory and is successful to a point with Acid Witch as well.

Another strong point of the project is the fair use of solos, which might not be executed that much with other similar bands, yet adds a lot of color even to otherwise dull tracks in the album. The production is suffering a little bit, especially in the vocals section, which seem as if they were boosted in volume too much in the studio, however the filthiness of the sound in overall comes of aid during the listen. The label doom / death may be misleading, since there are also slight stoner elements and a strong trace of psychedelia,  or practiced witchcraft by the hippies of the 70's.

Once you get yourself comfortable around listening to bands like Hooded Menace or Coffins, Acid Witch become a bit irrelevant. For a more laid back listen, they fit very well when you want to listen to some cool doom riffing, gnarly growling, and if you're interested in the last days of October of classic horror movies of the past decades, you might find even more appeal in this band. Musically, they shouldn't shock anyone with their mastery, but it's not a band to discard right away either.