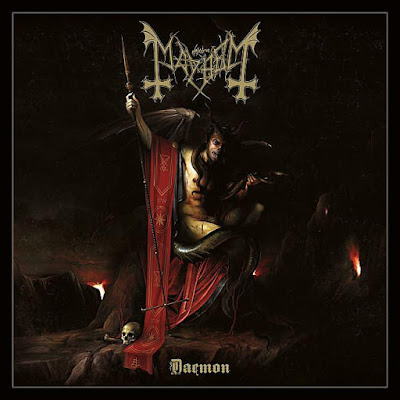 When the first single was released for the promotion of Daemon, it very quickly became the talk of the town. The black metal scene went frantic over the fact that Mayhem were actually orbiting very close to the musical patterns of their most famous album, and also most groundbreaking for the whole genre, De Mysteriis Dom Sathanas. As a few tracks were released one by one, it was clear that the band had decided to honor their grandiose debut with a similar minded record, and that new turn would definitely raise the eyebrows of everyone that ever had an interest in black metal.

It is very hard to compare albums of eras that different, and also no matter how diverse the mindset of any black metaller, it is wholly more or less agreed that Mayhem’s first album is literally untouchable, but it is also 100% accurate to say that Daemon draws steps in the same path in its every aspect. The band hadn’t won me the last decade, neither with Ordo ad Chao nor with Esoteric Warfare, albums that featured the modern Mayhem sound but weren’t as memorable as their material from the nineties, yet they earned my respect as unique parts of their discography. In fact, something sounding like De Mysteriis… was completely out of the question in my head, which had Daemon strike like a lightning on me but on a fair part of the scene as well.

The album has the same line up as in Esoteric Warfare, while the production was done by no other than Necromorbus, featuring artwork by Daniel Valeriani, a piece that might be my favorite cover they have ever had so far. The building up worked in the band’s favor, and ought to have the listener press play in a totally welcoming position, ready to go through the experience as if we all remember the first day. Ghosts from the past will be constantly dancing around while Daemon is playing, especially in pieces like “Malum”, “Aeon Daemonium” and “Worthless Abominations Destroyed”, where the resemblance is striking, but in general the record’s sound is as clean and powerful as 2019 allows.

Attila’s vocals are wonderful, since he offers his whole range of growls and insane high-pitched screams, the bass work is equally wonderful and audible throughout the whole process, but the hardest hitter is the guitar work. The guitar riffs of are pure gold, a glorious collection of melodies out of the most intimidating form Mayhem ever had, they are relentless and will not let go of the album’s grip up until the end. It is very hard to feel bad about an album like that, from one of the originators of this style, executed so powerfully.

One can only wonder about the motivation behind this choice of the musicians, who manifest a sound that will please as many fans as possible (me included), whether that was a product of artistic inspiration or a combination of that and the pressure of the world for them to give up on their new material from the last records and go back to something the public wants them to do. That would be a compromise difficult to forgive, especially coming from Mayhem, and I would perhaps give it a bit more weight if Daemon didn’t deliver, but it totally does. I loved listening to it and I will be repeating it for a long time, as this record is by no means a sad replica of De Mysteriis…, its merit directly stems from the talent of its members to produce exactly that. If we are talking about a case of fan service, it still is the best fan service I have ever had.

All the tracks are top-notch, brutal and aggressive, the musicianship is at its highest, and frankly this is what, in my point of view, Mayhem represents. It is compositionally potent and packed with awesome guitar lines, which makes it hard to ignore and a total pleasure to listen. . Listen to “Bad Blood” and tell me you were not moved by its intensity.

It is understandable that it needs to be promoted as such, with 51-year old Necrobutcher going out and saying he was also meaning to kill Euronymous back in the day, a statement that is giving out only weird feelings. We have not recovered from the movie still, now come interviews like that, all of this is really unnecessary and could have been avoided. The music speaks for itself, and Daemon is spectacular. All of the chit chat around it, even if it comes from the band itself, is just noises. You could replay this album for forty times in a row and still you wouldn’t mind. Focus on the content itself and you’ll be convinced.