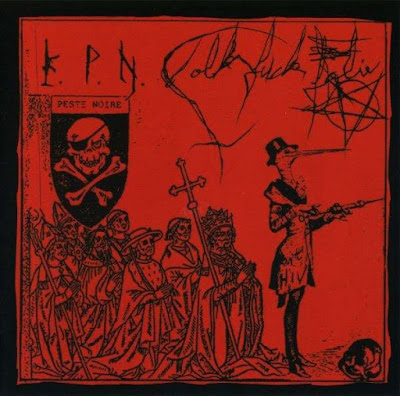 After an exceptional debut in 2006, Peste Noire released an EP named Lorraine Rehearsal in 2007, a few months before their second record Folkfuck Folie. This is important for two reasons: first, all the tracks in that EP are awesome, and second, the tracks were also in the full length. Neige of Alcest is indeed included in the line up and the artwork has been done by no other than Fursy Teyssier (Les Discrets), known for his works in post-black and post-rock in general. And of course, Audrey Sylvain also does some backing vocals in "Amour Ne M'amoit Ne Je Li". She later was the female singer in 2009's Ballade cuntre lo Anemi francor.

I may be the only one who first got really into Folkfuck Folie and then the rest of PN's discography. It has the signature black metal execution of Famine, it's the definition of a filthy sound and in my opinion, has some of the band's classics like "Maleicon", "Chute Pour Une Culbute"  and "D'un Vilain". After all, isn't the last number "Paysage mauvais" one of the fastest and most kickass Peste Noire tracks ever?

The vocals are a bit distant and under-recorded, but I think that's a problem of the shitty production and not from actual powerlessness of Famine's voice. Peste Noire display classic black metal patterns here with respect to the 90's French scene as well as Burzum, not totally alienated from their first album. The transformation truly began with Ballade... and naturally, there is always a bit of classic rock'n'roll somewhere in a Peste Noire record.

I don't want to speak very much about Famine's piss soaked lyrics. There are references to poets and writers, talks about his personal life and his love for the medieval times is apparent. Lyrics with translations can be read in Black Ivory Tower's post. Despite the constroversy Peste Noire raises, it would be dumb to deny their musical quality, as they are one of the most authentic black metal acts today. Their personal, dirty, scourging sound says a lot as well.