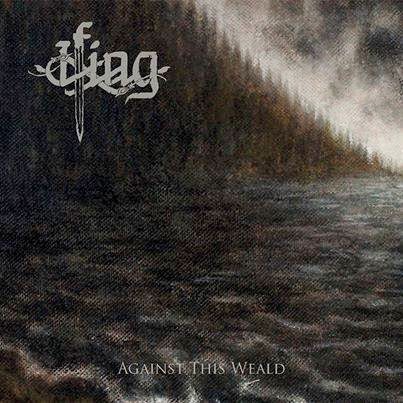 Mythology can be really inspiring and Ifing are a living example of the matter, as they are mainly influenced by Scandinavian tales without themselves originating from there. The band's debut and only release so far Against this Weald revolves around concepts like that and consists of three tracks with a total length of thirty six minutes, during which the listener goes through a variety of atmospheric / folk sounds.

The record was nicely produced and gives a nice sound to the compositions, which are carefully combining folk with black metal in the vein of classic bands like Viking-era Bathory and Agalloch. The two guys behind Ifing have played together before in a short lived melodic death metal band, meaning they're no strangers with each other's songwriting and that is obvious in Against this Weald, which is well written and intriguing.

The opening track is a four minute instrumental, which is simplistic and dark, synth driven ambient, containing melodies that can be found in styles like dungeon synth, setting the mood for the album. Since Against this Weald has three tracks only, the introduction is equally important, unlike other occasions when intros / outros are quickly skipped. After that, there are two main tracks  lasting thirteen and eighteen minutes each, which contain most of the band's musical ideas.

“The Stream” starts off with a pounding guitar melody that reminds a lot of the American atmospheric black metal scene, provoking the same aura around the record as well. There are legit whispering / screaming vocals and various acoustic guitar parts, as well as samples with sounds of nature, offering the track the diversity is needs to keep the attention going. The band isn't scared to use clean vocals too in some moments, which are also really satisfying.

Along with the intense black metal, the folk sound is achieved mainly with keys like that in the first minutes of the long “Realms Forged” as well as the ending of the song, synth lines reminding a little bit of Summoning. The acoustics are melodic and approach the style of Enslaved, constructing a distinctive but not replicated sound for the record and the band. Musically, Against this Weald aches for atmospheric synths and riffs, as well as calm parts and sufficient ambiance, in a familiar but pleasing way whatsoever.

Ifing's first offer is a good sign of the band's intentions and presents notable work for fans of the genre. The band isn't experimenting with unused sounds in their music, knowing very well what they aim for and succeeding in creating it. Even if I wasn't comfortable with the album's structure at first, which looks incomplete at first, the content is great on it's own anyway.