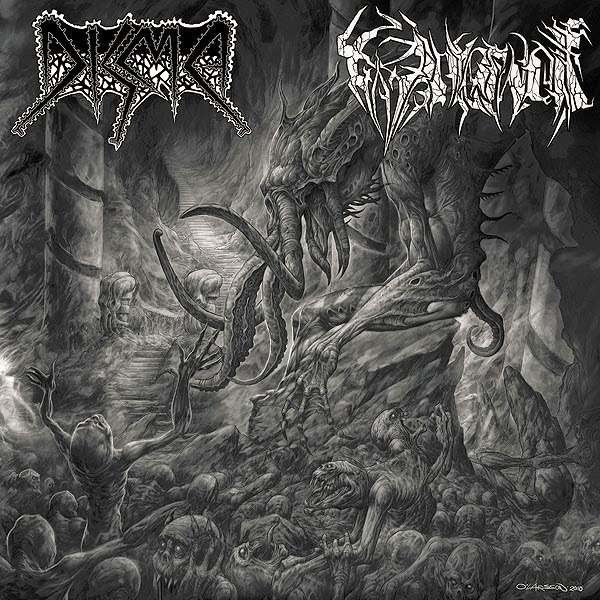 
Seeing these two bands combined in one release was something to be excited about, since I really like them both and have material they have released. This split was released in 2011, making it the second official release of Disma after their successful demo "The Vault of Membros", and the last release of Winterwolf to date. Both bands are regular smashers in the rest of their major releases, but this was something of a hurting failure.

The one and only aspect of the split that absolutely crashes and burns everything around it, is the shitty production. This is some annoying, fuzzy sound that almost steals the bands from their music and leaving nothing but a horrible buzz behind it. The guitars loud and painful to listen to, hardly leaving the rest of the instruments their sound, like the squashed drums and no-bass. I wish it had better production, as the tracks themselves are not that fucked up.

Each band offers one track in the split, and Disma's side with has " Of a Past Forlorn" which was included in their record Towards the Megalith, so there is no need for you to damage yourself with this version. Winterwolf have a new song "Eaters of the Cross" which is hard to appreciate under such circumstances, even though I can definitely say Cycle of the Werewolf is what you need to hear if you want to know this band.

All in all, this is a rather worthless release that happened just for the sake of happening. My view of each band is not any lower than it was before listening, since I know they are both good bands, but hell this here is not at all good. Solid bands of retro death metal with great material on their backs, both of them, yet I suggest you turn otherway here. At least the cover is cool.