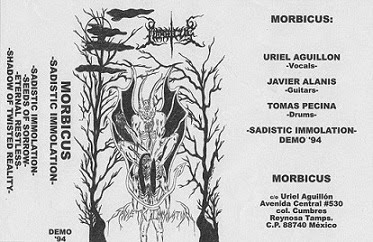 These guys reformed in 2011 after a fifteen year abscence, something that not many people noticed as the band released nothing but a bunch of demos during the early nineties and nothing more. The band has stayed unsigned to this day and Sadistic Immolation is their fourth demo release, back in October 1994. Morbicus follow the death metal / grindcore path and this is no difference, thus being itself indifferent.

A standard amount of noise is contained in this poorly recorded tape, with a bad balance between the various instruments and especially the drums, making it sloppy and unattractive. As said, the drums have a higher volume than needed for the most part, as well as some ridiculous symbal sounds that work against the overall effort. This, combined with the fact that the drumming itself is weak and random, like the drummer was just trying to play fast but kept on losing the pace, have a bad impact to the demo.

I kept listening and found very few interesting lines in term of the guitar work, which is also hard to come by because of the bad production. There might be a good riff or two at some point, but quickly vanishes again, before getting into  it's typical patterns. There are a few atonal solos that add nothing good to the tracks, since they are not into place and have no rhythm. The vocals are relatively ok, even though they sound a bit damaged because of the overall sound.

As a whole, I would say that Sadistic Immolation is an anemic attempt by the band, which has clear limits of musicianship and talent. These guys would never create anything above average so average might just be their upper limit, not even reached this time. Containing bland tracks, not recorded properly, is making this hard to accept on any level. Since they are now back, let's hope age has improved their skills, for the sake of any future releases.