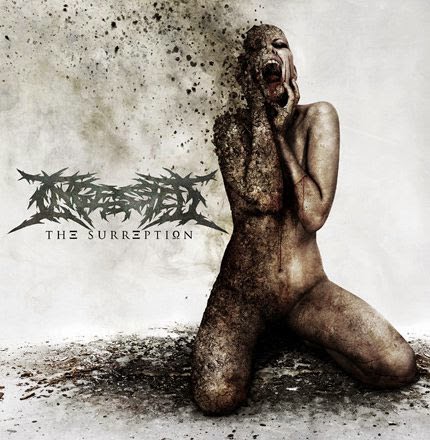 | Your flesh is my canvas |

Once starting as a pure, polished brutal death metal / deathcore band, Ingested came into this world with a split in 2007 but most notably their 2009 full length, Surpassing the Boundaries of Human Suffering. Mainly consisting of catchy slam riffs, blast beats and various growls, it's concept was into gore, necrophilia, rape and with a great cover like that, I would surely fit my BDM preferences.

The band released their second full length The Surreption in 2011 and while the music has remained close to the debut, the attitude of the band had generally changed a bit. This record revolves around more generic death and vengeance issues, it has a "nicer" cover, Martyr Defiled and Despised Icon members doing guest vocals in a couple of songs, so the band has moved into something more core than death metal, as it seems.

The production of the record is the same as the debut full length, equally hammering and stomping groovy riffs down your throat, not missing the constantly fast paced drumming. The skills of the band in terms of composition and song writing has not changed very much, so it's possible that if you enjoyed the first record musically, this will do as well.

Turning into something more accessible lyrically and aesthetically is not to be judged, since Ingested at least have their own ideas to present their own way, combining brutal death metal with catchy breakdowns. Now, if you happen to be in a gig they play and see kids hardcore dancing, don't freak out.