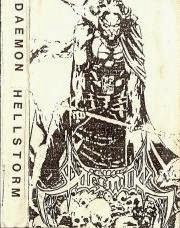 This band comes from Brunei, which was part of England until 1984, before becoming an independent country. Named Daemon, they released two demos in the beginning of the nineties and then split up, which was a wise decision if one is to judge from this really bad demo. Hellstorm was self-released and included six compositions, lasting only fourteen minutes in total.

The band is historically important, since it's one of the first extreme metal bands out of Brunei. The influences from Deicide are obvious, especially in the anti-religious / satanic lyrical themes, if not the music itself. Despite that, I can't say I listened to something even close to a mediocre demo, being completely dreadful from start to finish.

Opening with the ultra famous melody of the intro "Resurrection", the awful sound starts with the first track "Fester the Souls". All the instruments sound extremely noisy and horrible, with various recording mistakes, distant sound and overall shitty production. I doubt these dudes spent a minute more in the mixing sessions, after just recording the rehearsals a tape recorder. Even if the music was good, it would be impossible to enjoy with such false sound.

Apart from the production, the band lacks identity in the compositional part as well. From what I managed to hear, there are repetitive riffs, typical worn out growls and poor, boring drum lines. There are not even a couple of moments  for anything to appear a little higher than the average flood, making Hellstorm more like being a shitstorm for the listener. For DIY bands of that time, it is understood, but still it's an atrocious result.

It's obvious that Daemon did nothing right with their puberty back then, especially with their musical attempts. The only thing I enjoyed in this demo were the intro and outro, which are instrumental samples / recordings taken from other famous pieces instead of the band itself. I doubt anyone out there would enjoy listening to this demo, except if you are a member of the band and just remember the fun you had making it.