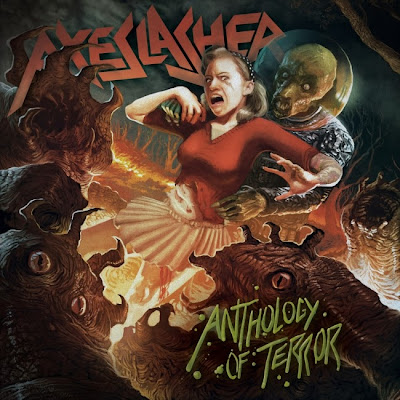 I don't usually like bands with funny lyrics or joking subjects and titles, since they seem generally offending to the rest of the scene of hard working musicians. This includes comedy metal or crossover thrash, goregrind and other inconsistent genres, they seem to have a very immature and temporary approach to music. Before you freak out, of course there are exceptions and Axeslasher from Colorado is one. The odds to like this new band are a lot, starting with the perfect cover right out of the classic horror cloud, it's colourful and very realistic, something I fell in love with on sight (because Ken Sarafin is a genius).

Anthology of Terror Vol.1 is the first EP release (containing six tracks) by the band and from it's good ratings, I would say people can recognize solid thrash metal. The production of the record is clean and harsh, creating a direct and cutting sound, deriving mainly from the guitar noise. The guitar work comes down to cutting riffs and solos as well as some groovier, hardcore lines to boost the headbang even higher. It is not easy going and doesn't rest a minute, it does not remind of any other band and it's pretty heavy without necessarily sounding old school. All the vocals are shrieked and there is no clean singing at all, like these were some Skeletonwitch rehearsals or early steps. In this kind of edgy music, any cleans would ruin everything anyway. The drums are pretty full and rely on blast beating rhythms a lot, I could live with less of them but they are solid in general, energetic and present at all times.

The record opens with a one and a half minute instrumental track, the infamous "Mark of the Pizzagram" which has hammering blast s and a nice guitar melody, as "Invasion of the Babysnatchers" introduces the full potential of the band for the first time. It is a short song and leaves space for the standout track of the EP "Woodland Tortuary" to unravel. Awesome, lovely murder case samples and well written parts, with fast and middle paced moments that make it the one song to check out if you don't want to listen to the whole thing. "The Axeslasher" and "Order of the Coven" continue in the same vein, wielders of a diligent and productive mosh, while the last track "Gucci Gucci" has it's moments but is not as good as the previous three.

The concept of horror is also obvious, from the titles and the artwork (more and more bands adapt it lately, or?) if one excludes the ridiculous song names "Mark of the Pizzagram" and "Gucci Gucci", the source of my lean antipathy, even though I love pizza. And I'm sure Satan loves pizza to, so these guys totally have deep meanings behind their songs that I can't get.  This is a great debut release for a newcomer band, the assiduous effort is clear and should be left with some feedback. Judging from the title, I hope there are more volumes coming, with more horror inspired thrash metal and less goofy names, despite the fact that they are entertaining. Make sure to buy a pizzagram patch.