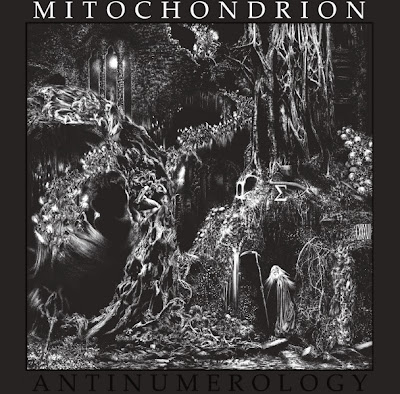 I have come to the conclusion that this is a serious band after all, but when I first listened to their music with Archaeaeon I thought the name was hysterical and some kind of joke. However, the sound itself is as punishing and stomping as I want it to be, so their goofy name does not prevent me from spinning their albums regurarly. The latest offering is this EP titled Antinumerology, containing three tracks and lasting no more than twelve minutes of thick and diseased noise, covered in a simple colored and wondrous cover art by Richard Friend. In fact, the album is split into Side A "Insummation" and Side B "137 (Mors Formulae) / Antinumerology" from the vinyl release so there are two compositions, the latter split into two parts in various internet versions of the album (and in Metal Archives).

Mitochondrion belongs to the family of Grave Miasma, Father Befouled and similar bands, which means they master the skill of an anti-human black / death / doom mixture, relentless and always with an enlightening and mysterious concept behind it. Just the title of this EP triggers some wondering for what this new riddle might be. The vocals on the record are high class deep growls, with no alterations or variety, as monotonous and disgusting as they can sound, with several points of twisted breathing and howling. They follow the traditional death metal pattern but not as distinguishable, since the singer(s) here focus more on the occult atmosphere than just brutality. Again, this should be well known to fans of this style.

The reason the EP does not get eventually boring is that it's short for it's own good and it has lot's of different parts to unravel as it progresses, from fast melodies to middle-paced tormenting moments, painted with interesting riffing all along. All three tracks and especially the second one "137 (Mors Formulae)", which is short and crushing, reminded me a lot of Dead Congregation and their masterpiece Graves of the Archangels. I can't say I noticed any significant bass lines in the album, probably because it was mixed on the down low, but one can feel it's effect during the dissonant lines of the EP.

The opening track "Insummation" is by far the longest composition (six minutes) and begins with amazing fast riffing, before descending into more doomier, grubbier harmonies, switching from hasty to slow parts until the end. The self-titled song is instrumental and maintains the same level of prosperity, lacking any new ideas but still tight. Mitochondrion deliver the same type of power with Antinumerology but I prefer their two albums, which contain significantly more music and a wider approach to death metal. Still, the EP had it's moments and I will be listening to the first two songs for some time, until a full album is constructed. The signs are scant but good.