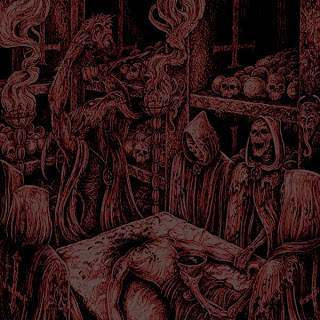 Embrace of Thorns are infamous in the greek underground scene. Their macabre way of story telling can hardly be called an attraction, but for those who have worm ears, the band is a delight. Continuing from where they left in 2007, they come back two years later with a second full length album that contains the basic ingredients for dirty old school death, and more.

One of the bands that has a pact with the nineties and the underground, they have sworn to lurk around the shadows, not the spotlights of musical success. The influences from bands like Proclamation, Bolt Thrower and Incantation are easy to spot, even though this band has inserted ambient parts and variations more than usual, giving them some points of uniqueness. The cover art is coloured in blood, blasphemic, and weirdly artistic, in its own way. The content is strongly anti-religious if you look at it closely, it describes the music of the band.

The album consists of thirteen songs that clock 34 minutes all together. Apart from the intros/outros and the interludes, each track last around two or three minutes, a satisfying length for the painful noise they're displaying here. The sound of the album serves the compositions, since its chaotic and relentless, exactly as it should be. They followed the advice of their old school death idols and did not demonstrate a hell of a craftmanship in the studio. The production and mixing are simple, lacking tricks, straightforward filthy. They do not rest with this great production, instead they put effort on each song of the album, either it is a slow-paced torture tool like "Venom in Veins" or "Perished In Mortal Agony", or a fast-paced one like "Perdition Hammer" and "Hymn to Triumph". "Tombs Of The Desecrated Zealots" is also a standout track, for its amazing intro.

You have been warned about what you're going to listen to if you decide to dig into this band. The fans of the genre will absolutely love it, as its memorable and devoted to the scene.