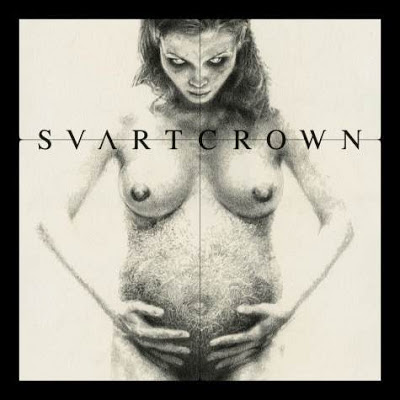 I've been meaning to write something about this but kept canceling it, until today. Svart Crown hail from the uprising and growing scene of France, formed in the middle 00's and this is their third full length album. From the first recordings i recognized immense talent all over them, i was curious to see if they would assimilate their ideas nicely in their music. I am a witness to this band's creative journey that has gave birth to three albums and who knows how many more, i can say it worths it. So, Profane.

Regarding the front cover art, its magnificent. A simple black and white drawing provoking a sinister aura that moves your attention even more about what's going to follow. The look on the woman's face is amazing, definitely gives you the chills.

What we have here is a splendid combination of black and death metal, covering areas of several styles like Behemoth, Deathspell Omega, Blut Aus Nord, Mitochondrion, Aosoth etc... They have some parts clearly influenced by the thick sound of their country's black metal scene, having added death metal elements with dissonant black/death metal riffs and screaming vocals. One can hear growls, shouts, shrieked yellings, even some deep cleans. With the proper attention, one can also admire the part of each instrument performed here, cooperating perfectly together. A load of magic tricks are performed by the insane drummer they have, certainly boosts the album's beauty with his fills and bass drum beats. There is an introduction lasting around 90 seconds opening the album, which consists of both fast and slow songs. I listened to the whole thing again and again, its not at all boring and i can't make any complaints about the compositions whatsoever.

Profane is a demonstration of the musical maturity and intelligence of the band, granting the listener with an approach of blackened death metal that is not outworn or overplayed. Compared to their previous releases, it depicts the progress of the band in the songwritting section, since the new songs have all kinds of interesting passages, avoiding repetition or mononoty. I personally enjoy the work done in the studio, the result of the production is extremely pleasing to me, not to mention the quality of the musicians here, just remarkable.

I can't imagine a fan of the above mentioned bands to be disappointed with this album. It has been on my playlist since its release and its here to stay.