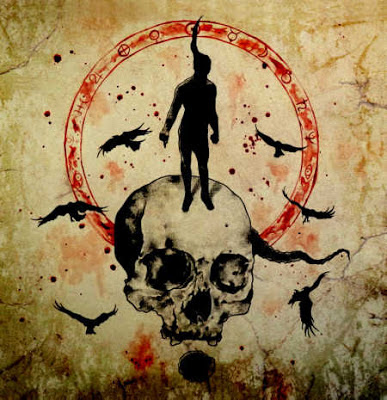 
I was looking forward to this new release by the Canadian Monarque, since i first listened to them from the split with Mortualia. It started off as a one-man project by Monarque himself, then in 2008 there was a drummer hired, and now there is a third person as well.

The music of Monarque would be described as deep atmospheric black metal. Please don't imagine soft and sad post-black bands that tend to have an atmosphere in their music, it is not the case here. The fast paced drums with harsh vocals and riffs, enhanced by disctinctive synths placed meticulously all over the tracks, gives you the feeling this band expresses. A cold snow-white mountain peak exposed to the wrath of nature. The cover artwork intrigued me so i searched for the artist to find more information about it. The title of the work is "Novissimis Temporibus" created by Maxime Taccardi, who also used his own blood to paint it. The art symbolises the end of the world. It is a a painting of great artistic merit and it is a fine choice for a great music synthesis.

The album starts off with a narration in french (i have no idea what it is about). Then begins the music, which is a relentless black metal piece, powerful and agressive. It brings out sorrow and despair not only with intense black metal, but also with the ambient or acoustic parts in the songs. There is also a bit more narratting in the album and solos. You heard me, and solos. One would not expect this in that particular music style, but Monarque has done it before and it gives a certain taste to every album they have released. Lys Noir is third album of them in 10 years and the preparations had begun since 2011 with a demo called La Mort, which contains the first recordings of the songs included in here. There is a serious amount of effort put in every Monarque album to achieve the best result possible, and that is clearer than ever in this album. To me, its the finest and most complete album they have released so far. There is also an instrumental composition entitled "Solitude", along with a cover of a Frozen Shadows track.

This band has been offering outstanding music to us since they first started and this new album is yet another step ahead, an improvement. A sophisticated, beautiful and influential record that should be not overlooked. Might make a list for me this new year's eve, who knows.