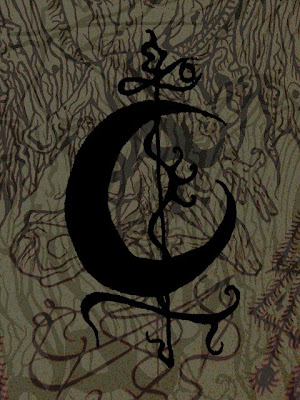 I got this as a gift, a neat red tape with a simple one side booklet. CDs, tapes and vinyls, when their package has been well taken care of, are like musical jewelery. You keep them at a safe place, you spend some minutes just looking at them now and then, it feels great when you use them. Instead of wearing them, you listen to them.

Chao originate from one of the steady and low profile countries when it comes to metal, Iceland. I don't know if you have ever listened to a band from there, be sure to do so though, seldom will one find a lame band from these distant cold lands. This is the debut EP and they are working on their first full length too, as we speak. I decided to check this because it was released on Terratur Possessions, which is a solid label to me, all the bands promoted from there are of quality and talent. I was looking for an obnoxious, inhumane band and i found it.

The record consists of three tracks, timing from six to eight minutes each. They have been constructed to defend the once glorious but now almost humiliated ideals of black metal, aiming to keep the compositional part as innocent and pure as possible. Using the various riff patterns like pieces of a puzzle, they have pieced together an amazing body of guitar work, with lots of variations during each track. The immense production of the sound makes them sound even more unworldly, something that pleases the ear of an aware listener very much. Imagine this as a looming presence somewhere inside the modern urban nothingness. I can't find any source for the lyrics (neither the booklet has them) but the EP gives me a feeling of despair coming from the every day life's depletion (like Leviathan for example) and less from the inside or a desolate location.

There are some clean yells and samples used in the songs. Strictly and carefully placed, they add their bit of misery on the album. There is also a church bell in the second track, quite enjoyable moment, i have to say. Entitled with simplistic and direct titles, it gives away the attitude of the band right away. "Darkness Liberates", the last track of the EP, is the best part to me. With a somber title that incurs and is common among many blacksters' minds maybe, it is a wonderful song that makes a perfect ending.

This release verges on the orthodox style, so if you enjoy bands like Ofermod, Ondskapt or similar, you will like this as well. It is a promising first offering and im definitely after new stuff by them.